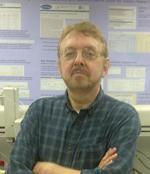 We study the molecular basis for major diseases of the aging eye, particularly cataract and age-related macular degeneration (AMD), using protein structural and functional genomics approaches. Cataract: The major proteins that confer transparency and focusing power on the eye lens are the crystallins. These proteins are highly adapted for their roles and have fascinating and informative evolutionary histories. They are very stable, lasting for years without turnover while maintaining the necessary organization to keep the lens working as a lens. However, genetic variants or age-related changes can disrupt this organization, causing the proteins to change conformation and aggregate into particles, including amyloid-like fibrils, that can scatter light and make the lens opaque, forming a cataract. We are currently using x-ray crystallography and various spectroscopic techniques to study how the proteins interact normally in the lens and what happens as they aggregate. In particular, we have derived a remarkable high resolution structural model for a crystallin aggregation intermediate. We are also studying a potentially important interaction of γ-crystallins and actin, a major structural and functional component of all cells. In earlier genomics studies (NEIBank) we discovered two novel lens-specific genes, KLPH and Lengsin. We are exploring their roles in normal lens development and find that deficits in these proteins give rise to focusing defects and age-related cortical cataracts. From its genomic location, Lengsin is a candidate gene for cortical cataract in humans. AMD: Protein and cholesterol-rich deposits basal to the retinal pigment epithelium (RPE) occur in some common forms of AMD. We have used functional genomics techniques to show that two AMD-related proteins, CFH and Fibulin3, form specific aggregates in eyes with dry AMD. Different Fib3 deposits also occur in wet AMD. We found that RPE cells stressed by serum-deprivation secrete Fib3. Expression studies showed that, over the same period, the cells up-regulate cholesterol synthesis and accumulate cholesterol while also becoming deficient in free zinc. Since serum-starvation of RPE may also occur in AMD, this provides an interesting new model for the progression of the disease, allowing us to test serum components that might help slow the processes that lead to vision loss. Studies on Retbindin, a novel photoreceptor-specific gene we discovered through NEIBank, have shown it has an important role in maintaining normal retina function and its deletion causes severe age-related defects in mouse retina with features reminiscent of AMD. Other work: We also collaborate with colleagues on other aspects of eye development and function. Recent work defined an essential role for a cluster of regulatory micro-RNAs (miR-183C) in the maturation of photoreceptors and other sensory neurons.

Dr. Wistow received his BA in Biochemistry from Oxford University, UK in 1976 and his Ph.D. in Protein X-ray crystallography from the University of London, UK in 1982. His thesis work described the first three-dimensional structure of a γ-crystallin. He joined NEI in 1982 and became a Section Chief in 1989. Dr. Wistow received NEI Director’s Awards in 1991 and 2000, an NEI Appreciation award in 2005 and an NIH Director’s Award in 2001. In 1997 he received the Cogan Award of the Association for Research in Vision and Ophthalmology "In recognition of outstanding and promising research on the structure and function of the lens".