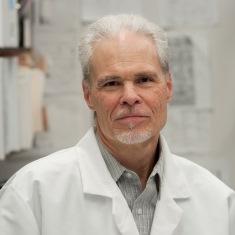 Modeling the Genesis and Progression of Human Melanoma in the Mouse

The major goal of the Cancer Modeling Section of the Laboratory of Cancer Biology and Genetics is to elucidate the complex molecular and genetic programs governing tumor initiation and metastatic progression through the development and analysis of better, more relevant genetically engineered mouse models of human cancer. Our aim is to employ such mouse models, and the tissues and cells derived from them, to uncover the molecular mechanisms underlying these processes, and identify candidate factors or pathways that may ultimately serve as therapeutic targets in patients. Our research efforts in this regard have been focused predominantly on cutaneous malignant melanoma for several reasons. Melanoma is an extremely aggressive, often fatal disease that has proven to be largely resistant to currently available therapeutic approaches. Compounding this health hazard, the incidence of melanoma has steadily increased over the last 40 years, and continues to rise at a time when the incidence of many other cancers is falling. Melanoma is particularly well suited to our major research interests. Its etiological initiating factor, ultraviolet (UV) radiation, is long known but its role in melanoma genesis remains poorly understood. Moreover, its propensity to metastasize, even years after removal of the original primary tumor, makes this cancer especially deadly.

We have created a mouse model, based on deregulated signaling of the receptor tyrosine kinase MET, that when provoked by UV radiation develops melanocytic lesions in stages that are highly reminiscent of human melanoma with respect to both histopathologic architecture and molecular wiring. This mouse is being used to experimentally address questions that have long perplexed the melanoma research community: is childhood sunburn a significant melanoma risk factor; is UV-B or UV-A the more influential melanoma agent; does sunblock prevent melanoma genesis? We are currently using this mouse model to determine what UV radiation actually does to melanocytes and how it induces melanoma genesis. For example, by designing mice in which melanocytes express green fluorescent protein in a tetracycline-inducible fashion, we can use fluorescence-activated cell sorting to isolate melanocytes from mice following UV irradiation and subject them to detailed molecular analyses, including array-based expression profiling and deep sequencing to search for mutations. Other mice we have generated in which Cre recombinase is conditionally targeted to melanocytes are allowing us to determine which tumor suppressor genes prevent progression from each stage of melanoma.

We are particularly interested in mechanisms associated with the spread and survival of metastatic cells. All data derived from mouse melanomas are compared with their human counterparts to determine the relevance of our findings. Ultimately, we plan to use our melanoma mouse model to perform preclinical studies, aimed at an examination of the role of cancer stem cells in drug-resistant residual metastatic disease.

Dr. Merlino obtained his B.A. summa cum laude in 1975, then went on to receive a Ph.D. in biological sciences in 1980 from the Department of Cellular and Molecular Biology at the University of Michigan, Ann Arbor. He joined the NCI in 1988. As a postdoctoral fellow in Dr. Ira Pastan’s lab, Dr. Merlino was the first to report the amplification/rearrangement of the epidermal growth factor receptor (EGFR) proto-oncogene in human cancer, and as a young independent investigator, he was among the first to show that growth factors could function in vivo as oncogenes using transgenic mouse models. With long-time George Washington University collaborators, Drs. Frances Noonan and Ed DeFabo, Dr. Merlino’s group also developed the first human-like mouse melanoma model and provided the first experimental evidence supporting the notion that childhood sunburn is a critical melanoma risk factor.

Dr. Merlino was Chief of the Laboratory of Cell Regulation and Carcinogenesis from 2004 to 2006. This lab, along with two others, merged into the Laboratory of Cancer Biology and Genetics (LCBG) in 2006.  He then served as Co-Chief of the new Laboratory from 2006 to 2017.  During this period, Dr. Merlino also served as a CCR Deputy Director (2010-2015). Currently, he is CCR’s Scientific Director for Basic Research.  At NIH/NCI, Dr. Merlino has served as the NIH Ombudsman for Animal Welfare, on the Steering Committee of the NCI Center of Excellence in Integrative Cancer Biology and Genomics and on the CCR Science Board.

From 2009 to 2012, Dr. Merlino was Executive Editor of Pigment Cell and Melanoma Research; he has also served on the Editorial Board of Cancer Research. Currently, he is Co-Chair of the Scientific Advisory Council, Melanoma Research Foundation and Adjunct Professor at the University of Maryland Regional College of Veterinary Medicine.

Honors and Awards
In 2016, Dr. Merlino was elected as an American Association for the Advancement of Science (AAAS) Fellow.  His other honors include the Society for Melanoma Research Lifetime Achievement Award (2013) and the Aaron B. Lerner/PASPCR Special Lectureship Award (2012).  Dr. Merlino has also received numerous awards throughout his career at NCI, including the NIH Director’s Award (2016), the NCI Director’s Award (2018, 2017, 2015), the NCI Merit Award (2009, 2002) and the NCI Outstanding Mentor Award (2008).

This page was last updated on September 7th, 2021