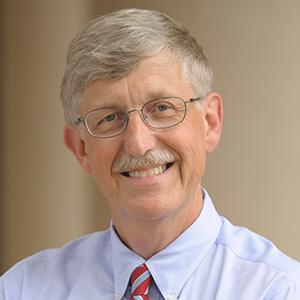 Dr. Collins' laboratory seeks to identify and understand the function of genes involved in a range of human diseases, both rare and common, with the ultimate goal of identifying new therapeutic opportunities.

One of the lab's significant projects focuses on Hutchinson-Gilford progeria syndrome (HGPS), a rare genetic disorder characterized by premature aging. HGPS patients typically die from cardiovascular complications in their teens. Dr. Collins' group discovered that a point mutation in the lamin A gene (LMNA) activates a cryptic splice donor, resulting in shortening of the normal version of the encoded protein by 50 amino acids near the C-terminus - this protein has been named "progerin". They also found that HGPS is associated with significant changes in the shape of the nucleus, these structural defects worsen as HGPS cells age in culture, and introducing progerin into normal cells induces the same changes. Cellular biological analysis implicates progerin in disrupting the normal process of mitosis. Investigation of normal human fibroblasts has demonstrated small amounts of progerin are present in normal cell populations, and increase in quantity as cells approach senescence. The shift in the LMNA splicing pattern to produce progerin is apparently triggered by shortened telomeres. Thus, the study of this rare disease potentially gives valuable insight into the process of normal aging. The lamin A protein is normally farnesylated at its C-terminus, which apparently helps target the prelamin to the inner surface of the nuclear membrane.

A subsequent protease cleavage releases this C-terminal fragment, allowing lamin A to join other proteins in the scaffold that lies just under the nuclear membrane. Progerin is correctly farnesylated, but cannot be cleaved, rendering it permanently anchored in the nuclear membrane, sequestering other proteins and functioning as a dominant negative. These observations led to the hypothesis that farnesyltransferase inhibitors (FTIs) might be beneficial in treatment of progeria, and cell culture experiments showed that FTIs could significantly ameliorate the nuclear-shape abnormalities seen in HGPS cells.

Because most progeria patients are in extremely fragile health, there are few opportunities to conduct human trials of potential therapies. Dr. Collins' group developed an animal model of progeria by reengineering human LMNA to carry the HGPS mutation, and inserting it into the germline of a mouse. The mouse demonstrates progressive cardiovascular disease that closely resembles the disease seen in HGPS patients. Specifically, these mice exhibit progressive loss of vascular smooth muscle cells in the media of their large arteries. Using the mouse model as a resource for screening potential therapies, the Collins laboratory demonstrated that FTI treatment not only prevented the onset of cardiovascular disease in young mice but also reduced the progression of the cardiovascular defects upon treatment of older mice. This research complemented other data in support of a clinical trial administering FTIs to HGPS patients, which has recently been shown to result in improved cardiovascular status.

More recent work on the HGPS project includes the discovery that rapamycin may be beneficial by stimulating autophagic removal of progerin complexes. The lab is also engaged in a long-term effort to generate a mouse that cannot produce progerin at all, in order to determine whether the absence results in increased longevity.

The other major project in the Collins laboratory is the complex, common, non-Mendelian condition known as type 2 diabetes (T2D). In long-term cooperation with researchers at the Finnish National Public Health Institute, the University of Michigan, the University of Southern California, and the University of North Carolina known as the FUSION project, Dr. Collins and his collaborators are studying over 30,000 individuals to identify susceptibility factors for T2D. The FUSION project began with linkage studies of affected sib pairs, and then moved on to perform genome-wide association studies (GWAS), and has subsequently become an integral part in several worldwide GWAS consortia studying T2D and quantitative traits. To date, these consortia have identified over 80 susceptibility loci for T2D and hundreds of loci affecting glucose, BMI, and lipid quantitative traits.

Many of these variants are associated with impaired insulin secretion or processing, and the vast majority reside in noncoding portions of the genome. These data suggest that altered regulatory function in the pancreatic islet may play an important role in T2D pathophysiology. Using ChIP-seq technology, the Collins lab has defined major features of the human islet epigenome, identifying regulatory elements that are necessary for normal islet function. Of great interest, T2D-susceptibility alleles identified by GWAS are found to lie preferentially in islet-specific enhancers, particularly in multi-kilobase tissue-specific enhancers that the lab has named "stretch enhancers".

A major new project of the FUSION study is to analyze genotypes (by whole genome sequencing), DNA methylation (by bisulfite sequencing), gene expression (by RNA-seq), and phenotypes on more than 300 individuals with a range of metabolic states, from whom muscle and adipose biopsies have been obtained. Characterizing the entire repertoire of human functional genomic elements in islets, muscle, and adipose should provide critical insight into the molecular mechanisms involved in diabetes susceptibility.

Francis S. Collins, M.D., Ph.D., is the former director of the National Institutes of Health (NIH). As the longest serving director of NIH — spanning 12 years and three presidencies — he oversaw the work of the largest supporter of biomedical research in the world, from basic to clinical research.

Dr. Collins is a physician-geneticist noted for his landmark discoveries of disease genes and his leadership of the international Human Genome Project, which culminated in April 2003 with the completion of a finished sequence of the human DNA instruction book. He served as director of the National Human Genome Research Institute at the NIH from 1993-2008.

Dr. Collins' research laboratory has discovered a number of important genes, including those responsible for cystic fibrosis, neurofibromatosis, Huntington's disease, a familial endocrine cancer syndrome, and most recently, genes for type 2 diabetes, and the gene that causes Hutchinson-Gilford progeria syndrome, a rare condition that causes premature aging.