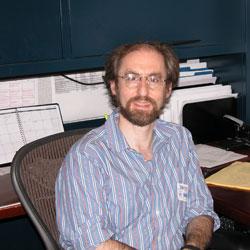 Axon Guidance: For a receptor at the cell surface to make an axon grow, and grow in the right direction, its effects have to be channeled by intracellular signaling cascades to control cytoskeletal dynamics. This is the most fundamental process in axon guidance, but how does it happen? To find out, we study modulation of the Abl tyrosine kinase signaling network by the receptor Notch in Drosophila. Using molecular and classical genetics, biochemistry, and in vivo live imaging of growing axons with fluorescent bioprobes, we have been led to an entirely novel and unexpected model for how Abl signaling directs axon growth. We find that Abl simply introduces a subtle spatial bias into the intrinsic, stochastic fluctuations of the axon cytoskeleton, thus gently nudging the growing axon along just the right trajectory by modulating the inherent dynamics of actin networks. Ongoing efforts couple cutting-edge high resolution microscopy with molecular and genetic manipulations to visualize and perturb the molecular interactions that execute this mechanism, and on computational modeling to both challenge and refine our new picture of axon growth.

Neurodegeneration: Research in many labs has revealed a host of physiological processes whose dysfunction contribute to neurodegenerative disease: proteostasis, mitochondrial function, innate immunity, neuronal excitability, axonal integrity, and above all, aging. But what are the connections between these processes? How does their interaction produce the overall outcome of nervous system degeneration? By studying a simple, endogenous neurodegenerative syndrome in Drosophila – gain- or loss-of function of the Cdk5/p35 protein kinase - we can now show that these degenerative processes separate into three, largely parallel mechanisms that interact synergistically to cause death of neurons. First, altering Cdk5 activity disrupts the integrity of the axonal cytoskeleton, leading to axon swelling and fragmentation, and also to loss of the specialized axonal domain where action potentials initiate. Second, altering Cdk5 inhibits autophagy, which in turn hyperactivate the innate immune system, causing release of neurotoxic quantities of anti-microbial peptides. Third, altering Cdk5 accelerates the absolute rate of aging, thus producing an overall organismal fragility, exacerbating the consequences of the other two degenerative pathways and, together, leading to disconnection and death of the neuron. Ongoing efforts focus on identifying the direct links between Cdk5 and each of these pro-degeneration pathways, and in particular on identifying how their effects can be reduced or eliminated to restore neuron health.

Dr Giniger received his BS from Yale University (1979) and his Ph.D. from Harvard (1988), the latter studying the yeast transcriptional activator, GAL4, with Dr Mark Ptashne. Dr Giniger then turned to postdoctoral work with Dr Yuh Nung Jan at UCSF, where he initiated studies of axon guidance in Drosophila. Dr Giniger continued this work while on the faculty of the Fred Hutchinson Cancer Research Center, in Seattle, WA, prior to joining NINDS as an Investigator in 2004. Dr Giniger continues to study the mechanism of axon guidance, using in vivo live imaging, biochemistry and genetics to investigate how cytoplasmic signaling pathways interpret external guidance cues to direct axon growth. In recent years, his lab has also begun to investigate adult-onset neurodegenerative diseases. In particular, he seeks to understand how aging interacts with defects in the homeostatic machineries of the neuron, and of the organism, to cause progressive disruption of neural circuits and neuron loss.

This page was last updated on Thursday, August 4, 2022