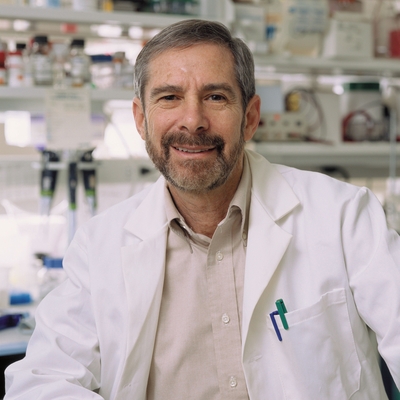 This laboratory has had a long-term interest in the molecular biology of tumor viruses and growth regulation. Much of the work has focused on fundamental aspects of tumor virology and neoplastic cell growth, but some of the research has direct clinical application. The systems studied include papillomaviruses and signaling through the Rho GTPases.

We have developed techniques for large-scale production of virus-like particles (VLPs) composed of papillomavirus structural proteins and high titer pseudoviruses, in which the authentic viral capsid has encapsidated a transducible reporter pseudoviral genome. These reagents have been used to: provide insight into basic aspects of papillomavirus biology; develop preventive VLP-based vaccines, three of which have been approved by the FDA; enable development of the current gold standard in vitro HPV neutralization assay and a second generation in vitro neutralization assay based on the molecular features of in vivo HPV infection; provide evidence that although binding to the target cell is usually the first step in the life cycle of a virus, HPV initiates its life cycle by binding to the acellular basement membrane at sites of disrupted epithelial cell barrier function before the virus transfers to the target epithelial cell; and demonstrate that strong immune responses can be induced by foreign gene expression in the mouse female genital tract, raising the possibility of using pseudoviruses at this site as vectors for vaccination against disease induced by genital infection. The repetitive structure of the VLP is crucial for its high immunogenicity, and the high efficacy of the HPV VLP vaccines is attributable to this strong immunogenicity, to the disrupted tissue barrier at potential sites of infection, which promotes exudation of neutralizing antibodies, and to the exquisite sensitivity of HPV to the neutralizing antibodies induced by the vaccine.

Regulation of Normal and Neoplastic Growth. Most of our growth regulation research has been concerned with oncogenes and tumor suppressor genes and their signaling pathways as positive and negative regulators of normal and neoplastic growth. In the past, this work was focused on the function of the Ras oncogenes, which are mutated in more than 25% of human cancer. More recently, we have studied molecular aspects of the tumor suppressor gene, DLC1, which encodes a Rho-GAP that is down-regulated in a wide variety of cancers, leading to the high Rho activity seen in many advanced cancers.

The cell contains several Rho-GAPs that can reduce the activity of Rho GTPases. However, most of them are not frequently down-regulated in cancer, in contrast to DLC1. We have hypothesized that DLC1 possesses important scaffold functions, in addition to its Rho-GAP function, and that this combination of activities leads to its frequent inactivation in cancer. Consistent with this hypothesis, we have found that DLC1 has several scaffold functions that contribute to its tumor suppressor function. The interactions include those between DLC1 and the focal adhesion kinase (FAK), talin, tensin, and caveolin. In addition, CDK5, a predominantly cytoplasmic serine/threonine kinase, phosphorylates several serines in DLC1, which activates the Rho-GAP and tumor suppressor functions of DLC1 by converting the protein from being in a closed, inactive conformation to an open, active dimerconformation, while AKT, another serine/threonine kinase, phosphorylates a different set of serines in DLC1, which inactivate DLC1 by converting it to a closed, inactive monomer.

Douglas R. Lowy, M.D., is Chief of the Laboratory of Cellular Oncology and, since 2010, has also served as Principal Deputy Director of the National Cancer Institute (NCI). From April 2022 to October 2022, he became Acting Director of the NCI, a role he also held from April 2015 to October 2017 and between April 2019 and October 2019. Dr. Lowy received his medical degree from New York University School of Medicine in 1968, and trained in internal medicine at Stanford University and dermatology at Yale University. He has directed a research laboratory at NCI since 1975, after receiving training as a Research Associate in the National Institute of Allergy and Infectious Diseases. Dr. Lowy is a member of the National Academy of Sciences (NAS) and of the Institute of Medicine of the NAS. For his research with John Schiller on technology that enabled the preventive HPV vaccines, they have jointly received numerous honors, including the 2007 Federal Employee of the Year Service to America Medal from the Partnership for Public Service, the 2011 Albert B. Sabin Gold Medal Award, the 2012 National Medal of Technology & Innovation (awarded in 2014), the 2018 Szent-Györgyi prize and the 2017 Lasker-DeBakey Clinical Medical Research Award, the country’s most prestigious honor for biomedical research. Dr. Lowy has also received the National Medal of Honor for Basic Research from the American Cancer Society and is an fellow of the AACR Academy.

This page was last updated on Wednesday, October 5, 2022