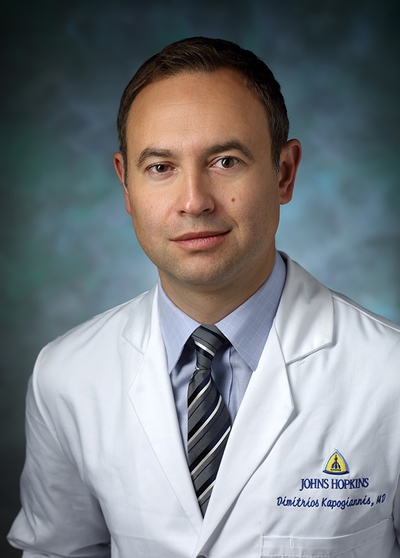 Neurodegenerative diseases, such as Alzheimer's disease (AD), are characterized by a long preclinical phase with evolving and progressively irreversible pathology. Therefore, biomarkers are essential for identifying patients early in the course of the disease, when disease-modifying interventions may have the greatest chance of success. In addition, biomarkers have the potential to boost therapeutic discovery for neurodegenerative diseases by enriching the participant population in clinical trials for the presence of pathology, and as surrogate outcomes. Dr. Kapogiannis' research program aims to develop biomarkers for preclinical diagnosis of AD and neurodegenerative diseases, precise patient characterization and demonstration of target engagement in clinical trials. A limitation of biomarkers measured in the soluble phase of blood is their tenuous link to brain pathology, since they are often produced by multiple tissues and their brain-derived fraction has to cross multiple barriers before reaching the circulation. The Kapogiannis lab has pioneered a new approach to biomarker discovery in AD that addresses this limitation by harvesting extracellular vesicles enriched for neuronal and astrocytic origin from blood. Given their origin, neuronal and astrocytic-enriched extracellular vesicles can be used to interrogate pathogenic processes previously inaccessible in vivo, akin to a "liquid biopsy". The Kapogiannis lab has identified candidate extracellular vesicle biomarkers that reflect multiple pathogenic processes involved in AD and other neurodegenerative diseases. He is currently in the process of conducting larger-scale validation studies to validate lead candidate biomarkers and demonstrate their ability to predict AD diagnosis at the preclinical stage. Given the pathogenic significance of abnormal brain metabolism and the therapeutic potential of targeting brain insulin resistance in AD, he has also pioneered the use of Magnetic Resonance Spectroscopy biomarkers reflecting brain energy metabolism in AD. Finally, Dr. Kapogiannis is conducting early phase interventional studies targeting brain metabolism to treat or prevent AD. Having completed a pilot double-blind placebo-controlled randomized clinical trial of the antidiabetic agent exendin-4 in early AD, he is currently conducting a controlled randomized clinical trial of 5-2 calorie restriction and will soon start a controlled randomized clinical trial of an oral ketone ester, both in middle aged individuals at risk for cognitive impairment, looking at changes in extracellular vesicle and Magnetic Resonance Spectroscopy biomarkers alongside cognitive outcomes.

Dimitrios Kapogiannis is a Behavioral Neurologist and Clinician-Scientist who specializes in Alzheimer’s disease. He acquired his Medical Degree from the University of Athens Medical School, completed a Neurology residency training program at the Massachusetts General Hospital/Brigham and Women’s Hospital/Harvard Medical School, and a Clinical Fellowship in Behavioral Neurology at the National Institute of Neurological Disorders and Stroke. He has been a Clinical Investigator at the National Institute on Aging conducting clinical and translational studies in Alzheimer's disease since 2014. He is also conducting clinical trials of metabolism-based interventions for Alzheimer’s disease prevention. He holds an adjunct appointment as Associate Professor at the Department of Neurology of Johns Hopkins University and provides clinical care at the Johns Hopkins Memory and Alzheimer's Treatment Center. Dr. Kapogiannis has authored more than 100 peer-reviewed publications. He is also member of the Editorial Boards of "Ageing Research Reviews", "npj Aging and Mechanisms of Disease" and “Cells”. Dr. Kapogiannis is widely recognized as an expert in the field of Extracellular Vesicle biomarkers and has pioneered the use of neuronal-enriched Extracellular Vesicles for the clinical and preclinical diagnosis of Alzheimer’s disease and other neurodegenerative, neurological and psychiatric diseases.