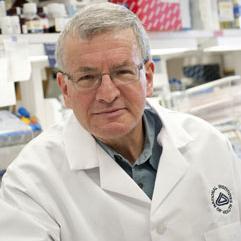 The central role of c-MYC in the regulation of cell growth, proliferation, apoptosis and differentiation demands tight regulation. MYC is regulated by a bewildering array of intracellular and extra cellular signals and conditions operating through a host of DNA-bound transfactors. Somehow the influence of each of these factors must be weighted according to the physiological and pathological state, and integrated with the others to set the output of the c-myc promoter. The complexity of this situation is compounded because 1) c-myc mRNA and protein are very short-lived and of low abundance, and so stochastic fluctuation in MYC levels from cell to cell would seem to be inevitable, and 2) minor perturbation of MYC levels alters cell and organismal physiology and pathology. Therefore molecular devices must constrain c-myc expression within acceptable limits.

We have discovered that in addition to conventional transcription factors (including AP1, octamer, and the RFX, as described in our early investigations), several proteins that bind sequence specifically with single stranded DNA (ssDNA) interact with particular elements in the c-myc promoter and its upstream regulatory region. The FUSE (Far Upstream Sequence Element) Binding Protein (FBP) and the FBP Interacting Repressor (FIR) were discovered in our group, and the transcriptional regulatory properties of ssDNA-binding hnRNP K were first recognized in our studies. We have investigated the structure, function and mechanism of these factors in particular, and have aimed to elucidate the general role of conformation and topology sensitive transcription factors.

FUSE, FBP and FIR comprise elements of a system regulating the transition from transcription initiation through promoter escape--the point at which unencumbered transcription elongation occurs and the promoter is again available for reinitiation. In vitro and in vivo this transition is rate limiting for many promoters. FBP and FIR operate through TFIIH to accelerate or retard, respectively, this transition. The continuing influence of FBP and FIR throughout this process indicates that other activators and repressors binding with TFIIH (p53, E2F, estrogen receptor, etc.) may behave similarly. Allowing activators and repressors to influence sequentially the rate of nucleotide addition between initiation and promoter escape provides a means to sample and integrate the array of DNA-bound transfactors for the genesis of a single transcript. The operation of the FBP-FIR-TFIIH system is impaired in cells from xeroderma pigmentosum B (XPB) patients that have mutations in the p89 helicase subunit of TFIIH. A defect in c-myc regulation may compound the DNA repair deficit of the afflicted and contribute to their several thousand-fold increased risk for cutaneous malignancies.

FUSE is melted in vivo when c-myc is expressed, and the solution structure of the FBP-FUSE complex demonstrates that single-stranded DNA is slotted into the grooves of FBP's KH-domains. The DNA-protein register is fixed by sequence-specific interactions. Thus FBP-FIR action is obligatorily coupled with factors, processes or conditions that destabilize duplex DNA. FUSE is, theoretically and experimentally, peculiarly sensitive to melting driven by supercoiling-torsional strain. Therefore FUSE melting is likely to be coupled with ongoing c-myc promoter activity since transcription is the major source of torsional stress in vivo. For a short-half life, low abundance mRNA, the FUSE-FBP-FIR-TFIIH system may provide a real-time mechanism to constrain fluctuations in MYC levels more tightly than possible with slower end-product, feedback. Our recent studies indicate that the variations in torsional stresses induced in vivo by topoisomerase inhibitors influence promoter architecture and transcription rates in vivo on a variety of genes in vivo, including c-myc.

Single-strand DNA binding proteins may help to regulate gene expression in other ways. By stabilizing melted loops, single-strand DNA binding proteins introduce flexural and torsional hinges-universal joints--thereby facilitating the juxtaposition of DNA elements and bound factors. Therefore these proteins and elements also serve an important architectural role by granting position-independent access of transcription factors with promoters and with complexes that remodel and modify chromatin. Sequence specific, single strand DNA binding proteins also expand the regulatory potential of a single segment of DNA. The binding of duplex and single strand interacting factors is mutually exclusive, so a single segment of DNA may recruit distinct constellations of factors without re-regulating the levels or activities of individual proteins. Such conformational switching governs the recruitment of Sp1 versus hnRNP K on the c-myc promoter.

The principles we are uncovering are likely to operate on important genes whose levels must be tightly controlled. Such genes are likely to regulate important processes, and deregulation of these genes may contribute to diseases such as cancer. The importance of DNA topology and conformation for proper regulation is underscored when we remember that topoisomerase inhibitors are potent anti-neoplastic agents. The interlinks between DNA structure, topology and conformation with the early events in transcription promise to expose new approaches to understand and control the physiological and pathological expression of regulatory genes like c-myc.

Dr. Levens received his M.D. and Ph.D. from the University of Chicago. Subsequently, he completed residency training in anatomic pathology at the Laboratory of Pathology, NCI, where he is now the chief of the Gene Regulation Section.