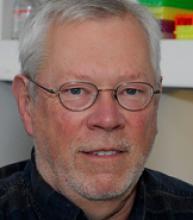 The Host-Parasite Interactions Section studies the basic molecular and cellular biology of chlamydiae and other obligate intracellular parasites. Chlamydia trachomatis is the etiological agent of several significant diseases of humans, including trachoma, the leading cause of infectious blindness worldwide. It is also the most common cause of sexually transmitted disease in the United States.

Chlamydia
Chlamydiae are obligate intracellular bacteria with a biphasic developmental cycle that involves cell types adapted for extracellular survival and intracellular multiplication. This developmental cycle consists of an environmentally stable cell form, termed the elementary body (EB), and a functionally and morphologically distinct vegetative cell type, termed the reticulate body (RB). Chlamydiae undergo their developmental cycle entirely within a parasitophorous vacuole, termed an inclusion, that is isolated from established routes of endocytic vesicle trafficking. Whereas the majority of intracellular parasites are thought to block maturation of the endocytic vesicle to a lysosome, chlamydiae rapidly dissociate themselves from this pathway and establish a functional interaction with an exocytic pathway that delivers sphingolipids and cholesterol from the Golgi apparatus to the plasma membrane. Interaction with this secretory pathway is thought to constitute a novel pathogenic mechanism whereby chlamydiae establish themselves in a site not destined to fuse with lysosomes.

Understanding the initial events in chlamydial differentiation, including the transition in properties of the endocytic vesicle to one which intersects an exocytic pathway, remains a significant challenge in deciphering the pathogenic mechanisms of chlamydiae. A number of scientific approaches are integrated in studies of early differentiation and subversion of host functions. These include global regulation of chlamydial gene expression via histone-like proteins, vesicular trafficking, cytoskeletal interactions, cell signaling, chlamydial modification of the inclusion membrane, and interactions mediated by Type III secreted protein effectors, which control entry and subsequent events.

Rickettsia
Rickettsia rickettsii is a member of the spotted fever group rickettsiae and the etiologic agent of Rocky Mountain spotted fever (RMSF). R. rickettsii is a small, obligate, intracellular, Gram-negative organism maintained in its tick host through transovarial transmission. Infection with R. rickettsii occurs through the bite of an infected tick. Once the organism gains access to the host, it is able to replicate within the host vascular endothelial cells and spread from cell to cell by polymerizing host cell actin. If not diagnosed and treated properly, infection with R. rickettsii results in a severe and potentially life threatening disease, although strains of R. rickettsii vary dramatically in their virulence in animal model systems and severity of human disease. The focus of efforts here is understanding the molecular mechanisms involved in the pathogenesis of RMSF.

With the completed sequences of multiple rickettsial species and recently developed technologies to genetically manipulate rickettsiae, it has become possible to investigate differences between virulent and avirulent strains of rickettsiae through comparative genomics and molecular biology.

Dr. Hackstadt received his Ph.D. from Washington State University. His postdoctoral work was in the NIAID Laboratory of Microbial Structure and Function. Dr. Hackstadt then assumed an associate professorship in the departments of pathology and microbiology at the University of Texas Medical School in Galveston. In 1990, he returned to NIAID, where he was appointed chief of the Host-Parasite Interactions Section, awarded tenure in 1995, and appointed to the National Institutes of Health Senior Biomedical Research Service in 2005. He currently serves on the editorial boards of Traffic, Cellular Microbiology, andInfection and Immunity. He is a past president of the American Society for Rickettsiology and was elected a fellow of the American Academy of Microbiology in 2005.