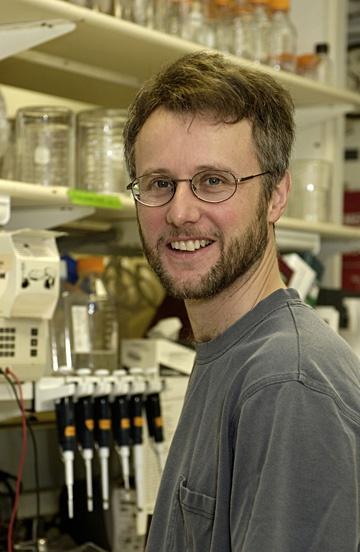 Section on Chromatin and Gene Expression

Gene activation involves the regulated recruitment of factors to a promoter in response to appropriate signals, ultimately resulting in the formation of an initiation complex by RNA polymerase II and subsequent transcription. These events must occur in the presence of nucleosomes, which are compact structures capable of blocking transcription at every step. To circumvent the chromatin block, eukaryotic cells possess chromatin-remodeling and nucleosome-modifying complexes. The former (e.g., the SWI/SNF complex) use ATP to drive conformational changes in nucleosomes and to slide nucleosomes along DNA, or to remove them altogether. The latter contain enzymatic activities (e.g., histone acetyltransferases) that modify the histones post-translationally to mark them for recognition by other complexes. Our previous work using native plasmid chromatin from the yeast Saccharomyces cerevisiae revealed that activation correlates with large-scale movements of nucleosomes and conformational changes within nucleosomes over entire genes. Using paired-end sequencing, we confirmed and extended these observations by determining nucleosome positions genome-wide. In addition, we discovered that, unlike canonical nucleosomes, the centromeric nucleosome, which contains a specialized histone (Cse4/CenH3), is perfectly positioned. Our current work focuses on the roles of chromatin-remodeling machines in nucleosome positioning and gene activation.

Dr. David Clark has worked in the chromatin field since graduate school. He completed a PhD with Professor Jean Thomas in Cambridge to address the mechanism of chromatin folding by the linker histone, H1. As a postdoctoral fellow in Dr. Gary Felsenfeld's laboratory at the NIH, Dr. Clark studied the problem of how RNA polymerase transcribes through a nucleosome. The nucleosome is a highly compact structure and a potent barrier to transcription. The lab was very interested in the proposal that a transcribing polymerase is preceded by positive supercoils with negative supercoils in its wake. Since the nucleosome contains negatively supercoiled DNA, it seemed possible that positive supercoils would destabilize nucleosomes ahead of the transcribing polymerase. Although the lab found that nucleosomal structure is surprisingly resistant to positive superhelical stress, it also observed that nucleosomes are relatively unstable on positively supercoiled DNA and therefore possess a latent tendency for transfer to negatively supercoiled DNA. The lab proposed that RNA polymerase might exploit this tendency during transcription: the nucleosome might be transferred from the positively supercoiled DNA in front of the polymerase to the negatively supercoiled DNA behind it. This idea was tested using a model system in which the fate of a single nucleosome placed at a defined position on a plasmid was determined after transcription, and found that the nucleosome moved behind the transcribing polymerase. These observations were followed up in subsequent work with Dr. Vasily Studitsky, in which evidence was obtained for a "spooling" model for transcription through the nucleosome. Independently, Dr. Clark published a paper with a postdoctoral colleague in Dr. Felsenfeld's lab, Dr. Takeshi Kimura, describing a theoretical analysis of chromatin folding using Manning's polyelectrolyte theory.

After establishing his own lab at the NIH, Dr. Clark developed a model system to study the events that occur when a gene is activated for transcription in vivo. The lab purified native plasmid chromatin containing a model gene expressed at basal or activated levels from yeast cells. Studies revealed that activation correlates with large scale movements of nucleosomes and remodeling of nucleosomes over the entire gene. In addition, the lab demonstrated that DNA sequence plays a major role in determining nucleosome positions in vivo. Later on, the lab identified Spt10p as the major histone gene activator in yeast, a protein with an integrase-like sequence-specific DNA binding domain fused to a putative histone acetyltransferase (HAT) domain. More recently, the Clark Lab has adopted global approaches made possible by the advent of massively parallel sequencing. The lab has published many genome-wide nucleosome mapping studies using paired-end sequencing, which confirm and extend single-gene observations to the entire genome. Specifically, they have shown that nucleosomes are disrupted or displaced on highly active genes. The lab has also mapped TFIIIB-TFIIIC transcription complexes genome-wide using a novel 'bootprinting' approach. Currently, the Clark Lab is exploring the roles of various ATP-dependent chromatin remodelers (RSC, SWI/SNF, ISW1, CHD1 etc.) in gene activation and in determining global chromatin organization. They have shown that different remodelers have different tasks in defining the chromatin organization of genes. For example, two nucleosome spacing enzymes, CHD1 and ISW1, compete to set the spacing on genes. Currently, the lab has a particular focus on identifying the non-histone barrier complexes that they propose are present at promoters (in nucleosome-depeleted regions). They are also extending their studies to higher organisms using the skills developed by working on the much simpler yeast model. The lab has several collaborative projects to examine chromatin organization in mouse cells.

This page was last updated on Thursday, November 10, 2022