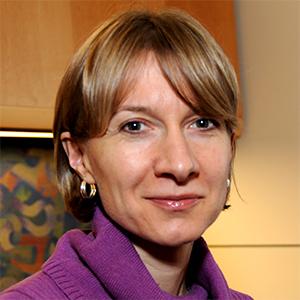 Dr. Bell has devoted her career to understanding the genetic and genomic alterations that drive solid tumors. In her previous position at Massachusetts General Hospital/Harvard Medical School, she and a team of colleagues and collaborators made a number of seminal discoveries uncovering novel somatic mutations that drive sporadic forms of human cancer, as well as germline variants in individuals with early onset cancer or a strong family history of the disease. Their findings included the groundbreaking discovery that somatic mutations in EGFR explain the dramatic clinical responses of non-small cell lung cancer patients to gefitinib, a small molecule inhibitor of EGFR.

In 2006, Dr. Bell moved to the National Human Genome Research Institute (NHGRI) where the goals of her laboratory are to identify genomic alterations that cause clinically aggressive forms of endometrial carcinoma, and to understand their functional consequences and potential clinical relevance. Endometrial carcinomas can be classified into numerous histological subtypes including serous, clear cell, and endometrioid carcinomas, as well as uterine carcinosarcomas. Serous and clear cell endometrial carcinomas, and uterine carcinosarcomas, are clinically aggressive forms of the disease. Identifying the somatic genomic alterations that are present in these tumors is a prerequisite to uncovering pathogenic alterations that might be exploited therapeutically.

To achieve their goals, the Bell group has capitalized on the unique genomic resources within the NHGRI cores and affiliated centers to identify somatic mutations in serous and clear cell endometrial carcinomas and in uterine carcinosarcomas. In early studies, Dr. Bell's laboratory used high-throughput Sanger sequencing, coupled with a candidate gene approach, to search for somatic mutations among protein kinases, because activated kinases can represent druggable targets. Using this approach, her laboratory discovered novel, high-frequency somatic mutations in the PI3-kinase (PI3K) pathway. Specifically, the Bell group was the first to show that exons 1-7 of PIK3CA, which encode the p85α-binding region of the catalytic subunit (p110α) of PI3K, are highly mutated in endometrial cancer. They were also the first to show that PIK3R1, which encodes the regulatory subunit (p85α) of PI3K, is highly mutated in endometrial tumors, including some serous and clear cell endometrial carcinomas. Further, they demonstrated that the novel mutations within the p110α and p85α proteins activate PI3K-mediated signaling. These discoveries pointed to new subgroups of endometrial cancer patients who might benefit clinically from targeted therapies directed against the PI3K pathway, and will inform ongoing clinical trials of these agents in endometrial cancer patients.

Dr. Bell's laboratory has also exploited state-of-the-art, next-generation sequencing to gain a more comprehensive understanding of the mutational landscape of clinically aggressive endometrial cancers. In 2012, the Bell laboratory published one of the first whole-exome sequencing studies of serous endometrial carcinomas, in which they reported the seminal discovery that chromatin-remodeling genes and genes that regulate ubiquitin-mediated protein degradation are highly mutated in these tumors. Specifically, they showed that CHD4, a component of the NuRD chromatin-remodeling complex, as well as FBXW7 and SPOP, components of the SKP1-CUL1-FBXW7 and RBX1-CUL3-SPOP ubiquitin ligase complexes, are mutated at high frequencies and at statistically significantly elevated rates in serous endometrial carcinoma. Together with their observations that FBXW7 and SPOP mutations are clustered in specific functional domains, these findings provide compelling genetic evidence that mutations in CHD4, FBXW7, and SPOP are likely to be pathogenic and contribute to serous endometrial tumorigenesis. In follow-up studies, the Bell laboratory has evaluated the functional impact of recurrent FBXW7 mutations in the context of serous endometrial cancer. Their findings provide the first biochemical evidence implicating mutant FBXW7 in the dysregulation of other cancer-related proteins in serous endometrial cancer cells, specifically, phosphorylated forms of Cyclin E1, SRC-3, c-MYC, Rictor, GSK3, P70S6 kinase, and AKT. In recent studies, using a combination of exome sequencing and targeted gene sequencing, the Bell laboratory validated and extended early findings, by others, that some clear cell endometrial carcinomas have molecular alterations that are shared with serous and endometrioid endometrial carcinomas. In their genomic studies of uterine carcinosarcomas, they found frequent truncating mutations in FOXA2, which encodes apioneer transcription factor that was not previously implicated in the molecular etiology of this tumor type.

Dr. Bell is a senior investigator at the National Human Genome Research Institute (NHGRI), part of the National Institutes of Health. She received her B.Sc. (Honors) in Zoology and Genetics and her Ph.D. in Biology and Biochemistry from The Queen's University of Belfast in Northern Ireland. She conducted her postdoctoral training at Fox Chase Cancer Center, Philadelphia, before joining Harvard Medical School and Massachusetts General Hospital, where she was an instructor of medicine from 1997-2004 and an assistant professor of medicine from 2004-2006.

Dr. Bell's graduate and postdoctoral studies focused on the fine-mapping of genomic deletions in ovarian cancer and in malignant mesothelioma as a means to home in on regions of the genome containing putative tumor suppressor genes. While at Massachusetts General Hospital/Harvard Medical School, Dr. Bell and her colleagues made a number of seminal discoveries including the landmark discovery that mutations in the EGFR gene explain the dramatic clinical responses of non-small cell lung cancer patients to gefitinib, a small molecule inhibitor of EGFR.

Upon joining NHGRI in 2006, Dr. Bell launched a new research program to identify genomic alterations that cause clinically aggressive forms of endometrial cancer. Her laboratory has since identified novel, high-frequency somatic mutations in PI3-kinase in endometrial tumors, thus uncovering previously unrecognized cohorts of patients who might benefit clinically from therapies targeting the PI3-kinase pathway. Her group reported one of the first whole-exome sequencing studies of serous endometrial carcinomas, in which they discovered frequent mutations in genes that regulate chromatin-remodeling and ubiquitin-mediated protein degradation. Dr. Bell's ongoing research aims to identify additional genomic alterations that drive clinically aggressive endometrial tumors, and to understand their functional consequences.

Dr. Bell received a 2007 PECASE award, which is the highest honor bestowed by the U.S. government on outstanding scientists and engineers beginning their independent careers.