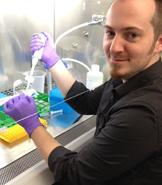 The T-Lymphocyte Biology Unit (TBU) performs research on the regulation of T-cell responses to chronic microbial infections, with the goal of developing methods to both enhance pathogen control and prevent immune mediated pathology.

Mycobacterium tuberculosis (Mtb) is an important human pathogen, as it infects 9.3 million people each year and leads to 1.3 million deaths. The success of Mtb as a pathogen is due to its ability to establish a lifelong pulmonary infection. T-helper cells are able to slow the growth of the bacilli and contain the infection for years, but little is known about the mechanisms controlling T-cell function during chronic Mtb infection.

The TBU has a major interest in the cell-surface inhibitory receptor PD-1. PD-1 is a co-inhibitory member of the CD28 family that plays a major role in attenuating CD4 and CD8 T-cell effector functions during chronic viral, bacterial, and fungal infections, as well as in cancer. Blockade of the PD-1 pathway has been shown to boost T-cell responses and enhance clearance of pathogens and tumors. However, inhibitory signals through PD-1 also play a major beneficial role in regulating autoreactive T-cells and sometimes are critical for preventing damaging immunopathology during infection.

Our recent work has shown that, in the case of Mtb infection, the absence of PD-1 causes CD4 T-cell responses to switch from host-protective to detrimental and actually drive fatal disease. This illustrates how not only the generation but also the appropriate negative regulation of T-cell responses is critical during Mtb infection. A major goal of the TBU is to characterize the mechanisms through which regulatory pathways, including PD-1, facilitate T-cell-dependent control or exacerbation of Mtb infection.

M. tuberculosis and M. avium are common causes of morbidity and mortality in HIV-infected patients due to the requirement for Th1 cells in control of mycobacterial infections, and antiretroviral therapy (ART) usually restores CD4 T-cell-dependent protective immunity. However, instead of the expected improvement in symptoms, HIV patients with co-infections sometimes experience a rapid deterioration, referred to as immune reconstitution inflammatory syndrome (IRIS), soon after initiating ART. IRIS has become a major problem in the clinical management of the HIV pandemic, and very little is understood about the mechanisms of pathology or factors determining the susceptibility to IRIS. We have developed a robust model of experimentally induced IRIS in M. avium-infected, T-cell-deficient mice. A major goal of the TBU will be to use this system to define the basic principles of IRIS, with the aim of generating hypotheses that can be tested in IRIS patients in collaboration with clinical investigators at the National Institutes of Health. Understanding CD4 T-cell repopulation of microbial-infected lymphopenic hosts may lead to novel therapeutic approaches that prevent IRIS and further decrease morbidity and mortality in HIV patients during ART.

Infection with the ubiquitous fungal pathogen Cryptococcus neoformans is another leading cause of death in AIDS patients. A related organism, Cryptococcus gattii, even has the ability to cause disease in otherwise healthy individuals. The only drug treatments for these infections cause serious side effects, and there is currently no vaccine to prevent cryptococcal infections. Another objective of TBU is to understand the determinants of host-protective immune responses against different Cryptococcusspecies.

Dr. Barber obtained his B.S from Rider University and his Ph.D from Emory University in the department of microbiology and immunology. In 2006, he joined the Laboratory of Parasitic Diseases as a postdoctoral fellow in the Immunobiology Section. In 2012, Dr. Barber was awarded a position as an Earl Stadtman Tenure-Track Investigator in the Laboratory of Parasitic Diseases.