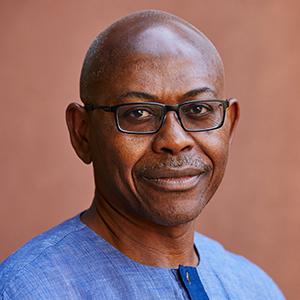 Dr. Rotimi's research focuses on the etiology of complex diseases and health disparities. His team studies interethnic differences in the distribution of genetic and environmental risk factors, with particular emphasis on populations of African ancestry.

The Africa America Diabetes Mellitus (AADM) study, developed under Dr. Rotimi's leadership, has enrolled over 6,500 related and unrelated type-2 diabetes (T2D) cases and ethnically matched controls from West (Nigeria and Ghana) and East (Kenya) Africa. Using this resource, his lab published the first genome-wide scan for T2D in Africans. In collaboration with deCODE Genetics, susceptibility loci for T2D were identified in three genes (TCF7L2, CDKAL1, and TCF2 [HNF1β]). Notably, the West African cohort has been useful for refining the association signals found in European and Asian ancestry populations; it has provided some of the earliest evidence for how relatively diverse populations might facilitate fine-mapping of loci originally identified in more homogeneous populations characterized by larger regions of strong linkage disequilibrium. CRGGH continues to use genomic data generated in African populations to refine and fine-map loci identified in European and Asian populations for multiple traits including glucose, uric acid, bilirubin, CRP and serum lipids.

Dr. Rotimi's lab has shown that a polymorphism in the endothelial nitric oxide gene is associated with diabetic retinopathy in Africans. In addition, they recently demonstrated that ADORA2A variants offer significant protection against the development of diabetic retinopathy in type-1 diabetes. Data generated in the lab have contributed to several international T2D consortia including the Meta-analysis of T2D in African Americans (MEDIA) Consortium that has performed meta-analysis of 17 genome-wide association studies (GWAS) for T2D in over 8,000 cases and 16,000 controls. Ongoing T2D research activities at CRGGH include 1) whole-exome sequencing of African families with at least four affected members (data generation is complete and analysis is ongoing), 2) GWAS of 1,200 cases and 1,200 controls from West Africa using the new and more efficient African-centric Affymetrix Axiom genome-wide array with more than 2 million markers, and 3) whole genome expression analysis on skeletal muscle obtained from biopsy from 45 subjects (expression QTL (eQTL) studies on the dataset are complete). This is the first such study from the African continent, and the database will be made available to the larger research community. Other accomplishments in this area include the mapping of variation in the FTO gene for obesity, characterizing the role of interleukin (IL)-6, IL-10, and IL-1RA in obesity and insulin resistance in African Americans (AA), and determining the loci associated with CRP, IL-10, IL-1Ra, and IL-6 levels in a GWAS of AA. Dr. Rotimi and his group have contributed with over 50 publications to describing the prevalence and understanding the etiology of diabetes and related traits in African ancestry populations.

CRGGH published the first GWAS for blood pressure (BP) in AA using data from the Howard University Family Study, a population-based sample of ~2,000 related and unrelated African Americans from the Washington, DC area that was collected by Dr. Rotimi and his group. GWAS loci in 5 genes reaching genome-wide significance for BP were identified. Of these, SLC24A4 and CACNA1H are potential candidate genes for BP regulation, and the latter is a drug target for a class of calcium channel blockers. The AA cohort has contributed to several consortia including: the International Consortium for BP Genome-wide Association Studies (ICBP-GWAS - Nature, 2011), the CARe AA cohorts for BP (Hum Mol Genet, 2011), and CARe for Renal Function (PLoS Genet, 2011). Ongoing hypertension research activities in the branch include whole-exome sequencing of AA families with multiple affected members and inclusion in the Minority Health Genomics and Translational Research Biorespository Database (MH-GRID) Network. Currently, the MH_GRID is focused on a subphenotype of primary HTN that is common among AA, and enriched for genetic determinants based on its early onset, severity, and associated kidney damage. The project is establishing an exome catalogue of 2,400 AA, with the ultimate goal of shedding light on the pathogenesis of HTN and associated traits in human populations.

In collaboration with colleagues in the United Kingdom and Africa, CRGGH has contributed significantly to understanding the pathogenesis of podoconiosis (Podo), also called "Mossy Foot." Podo is a geochemical condition resulting in bilateral swelling of the lower legs and feet resulting from a complex interaction between genetic factors and exposure to fine-grain sand, as a result of not wearing shoes. Podo is one of the most stigmatizing health conditions in areas where it is endemic, and most afflicts those living in poverty. Affected individuals and families are ostracized by their communities, and are often banned from schools, churches, employment, marriage, and social events. By working with the World Health Organization to list Podo as a neglected tropical disease, the international team of investigators, including Dr. Rotimi has successfully raised awareness of Podo. CRGGH has conducted a multi-generational family study in Ethiopia and estimated heritability of Podo to be 0.63, with a sibling recurrence risk ratio of over 5.0. The lab has conducted a Podo GWAS, the first GWAS of a non-infectious disease in Africa (N Engl J Med, 2012), and found a genome-wide significant association in the HLA class II locus, within or near HLA-DQA1, HLA-DRB1, and HLA-DQB1. These findings have been validated with a family-based association study involving 202 trios. Findings from the lab support the hypothesis that Podo may be a T-cell mediated inflammatory disease.

In contrast to the increased prevalence of HTN, T2D, and obesity observed with increasing westernization, the distribution of serum lipid parameters is remarkably uniform across African ancestry populations. In the United States, interethnic differences in serum lipid distributions are consistently observed, with AA having a generally healthier lipid profile than European Americans, despite differences in lifestyle factors that would suggest the opposite. This observation, coupled with the relative similarity in distribution of lipids between West Africans and AA suggests a genetic basis. The lab has conducted epidemiologic and genetic studies designed to investigate these observations. In a GWAS of serum lipids for those loci previously identified in European Americans and AA, CRGGH used the weaker linkage disequilibrium across the genomes of African ancestry individuals to fine-map regions originally identified in European populations, reducing the region of interest for 75% of loci evaluated. In the sequencing of five candidate genes (LPL, LCAT, ABCA1, PON1, and SERPINE1), rare and common SNPs were identified that were associated with differences in serum lipids. Notable among the findings were the observation of ancestry-specific effect for several variants in the LPL gene among these admixed individuals, with a greater effect observed among those with European ancestry in this region. These associations were further elucidated by replication in West Africans.

CRGGH has made significant contributions to the development of analytical tools for admixed populations, with recommendations for imputation, the development of admixture mapping panels from commercial high-density SNP arrays, new methods for joint ancestry and association testing, and improved analysis of discrete subpopulations. Dr. Rotimi's group has also developed tools that respond to the changing resources and challenges of the field as a whole: novel approaches for the simultaneous analysis of common and rare variants, approximate and exact tests of Hardy-Weinberg equilibrium using uncertain genotypes, and a test for gene-gene interactions in case-control studies.

CRGGH generated a database of pharmacogenomically-relevant gene variants by mining the 1000 Genomes database and conducting de novo genotyping using the Affymetrix ADME gene chip in 19 global populations sampled from 5 continents (Africa, North and South America, Europe, and Asia) for a total of 1,478 individuals. These data have confirmed that the use of generalized ethnic descriptors such as "white", "black", and "Asian" is inappropriate in health decisions. In collaboration with Shawneequa Callier, J.D., of George Washington University, CRGGH received funding to study physicians' assumptions on genetics and race/ethnicity in the treatment of hypertensive AA on Medicare. This study promises insights into how pharmacogenomic knowledge is used in clinical decision-making and how race is used by physicians when prescribing drugs.

Scientific approaches in Dr. Rotimi's lab take broader societal context into account, recognizing the risks of alienating individuals or communities from the scientific process. His group gives particular thought to ways in which scientists document and describe the nonrandom pattern of human genetic variation and its link to disease risks in different populations. By engaging in constructive conversation on these issues, CRGGH is contributing to the untangling of the complexities of genetic variation within the context of health disparities and group identity.. Along with investigators at The Sanger Institute in the UK, Dr. Rotimi's group is leading the design and analysis of the African Genome Variation Project that used the Illumina 2.5M chip to genotype 100 individuals from 21 ethnic groups from sub-Saharan Africa (SSA). This project will inform genomic studies in SSA by providing a reference for allelic, haplotype and LD structure for common variants in populations not currently covered by HapMap and the 1000 Genomes projects. Because much of the research in Dr. Rotimi's group focuses on vulnerable populations, bioethicists are enlisted to study informed consent issues.

Recently, Dr. Rotimi fulfilled a long-term goal with the launch of the Human Heredity and Health in Africa (H3Africa) initiative that began under the umbrella of the African Society of Human Genetics, of which he was the founding president. With an over $70 million commitment over multiple years from the NIH and the Wellcome Trust, H3Africa is designed to create and support a pan-continental network of labs that will be equipped to apply leading-edge research to the study of the genetic and environmental basis of disease susceptibility and drug responses in Africans. Dr. Rotimi's contribution to this pan-African initiative was profiled in The Lancet (2010), and a video commemorating the event is available.

Dr. Rotimi came to the NIH in 2008 to found the trans-institute Center for Research on Genomics and Global Health, with the mission of advancing research into the role of culture, lifestyle and genomics in disease etiology, health disparities, and variable drug response. His lab develops genetic epidemiology models and conducts epidemiologic studies that explore the patterns and determinants of common complex diseases in human populations with particular emphasis on populations of the African Diaspora. His team published the first genome-wide scan for hypertension and blood pressure in African Americans and for type-2 diabetes in West Africans. His lab contributes to the global understanding of human genetic variation by actively participating in the development of international genomic resources including the HapMap, the 1000 Genome and the African Genome Variation Project. He is on the Executive and Scientific Committee for the International Federation of Human Genetics Societies and was recently elected to the Human Genome Organization (HUGO) Council. He is the founding and past president of the African Society of Human Genetics (AfSHG).

He successfully led the establishment of the Human Heredity and Health in Africa (H3Africa) initiative with $76 million commitment from the NIH and Wellcome Trust. H3Africa will create and support network of labs that will conduct leading-edge research into the genetic and environmental determinants of diseases in Africans. He is on the editorial board of Public Health Genomics, Genome Medicine, Clinical Genetics and Journal of Applied and Translational Genomics. He is on the Coriell Personalized Medicine Collaborative Board. He was recently awarded an honorary professorship at the prestigious University of Cape Town, South Africa. He became the Chief of the Metabolic, Cardiovascular and Inflammatory Disease Genomics Branch in 2014.

This page was last updated on Wednesday, November 17, 2021