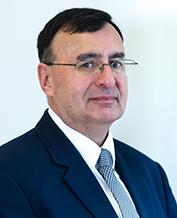 Carlos A. Zarate, M.D. is Chief, Section on the Neurobiology and Treatment of Mood Disorders and Chief of Experimental Therapeutics and Pathophysiology Branch (ETPB) at the National Institute of Mental Health, and Clinical Professor of Psychiatry and Behavioral Sciences, at The George Washington University.

Dr. Zarate completed a Fellowship in Clinical Psychopharmacology at McLean Hospital from 1992-1993, after which he remained as a staff member until 1998. At the McLean Hospital Consolidated Department of Psychiatry, Harvard Medical School, Dr. Zarate was the Director of the Bipolar and Psychotic Disorders Outpatient Services, Chair of the Pharmacy and Therapeutic Committee, and Director of the New and Experimental Clinic. From 1998 to 2000, Dr. Zarate was the Chief of the Bipolar and Psychotic Disorders Program, Associate Professor of Psychiatry, and Chair of the Grand Rounds Committee at the University of Massachusetts Medical School. In January 2001, he joined the Mood and Anxiety Disorders Program at the NIMH as Chief of the Mood Disorders Research Unit. In 2009, Dr. Zarate formed the Experimental Therapeutics and Pathophysiology Branch at the NIMH.