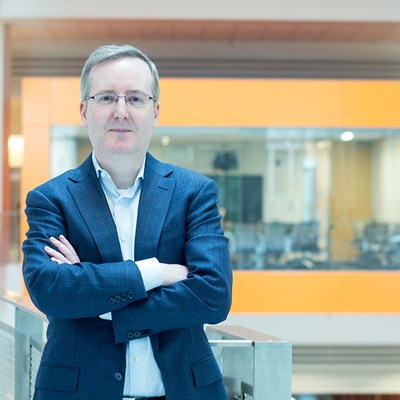 Dr. Traynor is a neurologist and a senior investigator at the National Institute on Aging. He is best known for his work unraveling the genetic causes of amyotrophic lateral sclerosis (ALS) and frontotemporal dementia (FTD). He led the international consortium that identified a pathogenic hexanucleotide repeat expansion in the C9orf72 gene as a cause of a large proportion of ALS and FTD (Neuron 2011). His team also identified the same mutation in ~1% of patients clinically diagnosed with Alzheimer’s disease (NEJM 2012).

Dr. Traynor is the co-recipient of the 2013 Sheila Essey Award and 2016 Potamkin Prize for his co-discovery of the C9orf72 repeat expansion as an important cause of neurodegeneration. He also received the 2012 NIH Director’s Award for his contributions to ALS research. In recognition of his contributions to medical research, he was elected as a Fellow of the American Neurological Association, the Royal College of Physicians of Ireland, the Royal College of Physicians (London), and the Association of American Physicians.

Dr. Traynor has over 200 publications in the neurology field, and he is an inventor on three issued patents.

He received his medical degree (MB, BCh, BAO, 1993), his Medical Doctorate (MD, 2000), and his Doctor of Philosophy (PhD, 2012) from the University College Dublin. He also received a Master’s in Medical Science (MMSc) from Harvard-Massachusetts Institute of Technology HST in 2004. He completed a neurology residency and fellowship at Massachusetts General Hospital and Brigham and Women’s Hospital in Boston.

Dr. Traynor served on the Integration Panel for the Congressionally Mandated Department of Defense ALS Research Program and the Genetics of Health and Disease NIH Study Section. He is a member of the NIH Gene Therapy Taskforce and sits on the Scientific Advisory Committee of the American Neurological Association. He has served on the editorial boards of the Journal of Neurology, Psychiatry and Neurology, Neurobiology of Aging, JAMA Neurology, and Lancet eClinicalMedicine, and is an associate editor of Brain.