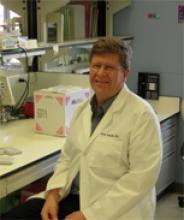 Stimulation of T helper (Th) cells and IgA precursor B cells in the Peyer's patches (PP) of the small intestine with orally administered antigens leads to the dissemination of B and Th cells to mucosal effector tissues, such as the lamina propria of the GI and upper respiratory tracts, and to secretory glands for subsequent antigen-specific secretory IgA antibody responses.

At the same time, however, systemic T- and B-cell immune responses to the same antigen may be suppressed--a phenomenon known as "oral tolerance." This ability of oral antigens to both stimulate mucosal and suppress systemic immune responses likely involves antigen processing and presentation in the PP/lymphoid follicles of the intestine, which have associated epithelial cells (M cells), specialized for the sampling and transport of luminal antigens.

The main objective of our work to date has been to understand how protein antigens are processed and presented in the murine PP and how this relates to oral tolerance and IgA B-cell development.

In 1992, Dr. Kelsall came to the National Institutes of Health, completed fellowship training in mucosal immunology in 1996, and became a senior investigator in 2003. His research focuses on the regulation of immune responses in the intestine, in particular the role that unique intestinal dendritic cell and macrophage populations play in the induction of immunity to intestinal viral pathogens and mucosal vaccines and in the pathogenesis of inflammatory bowel disease.