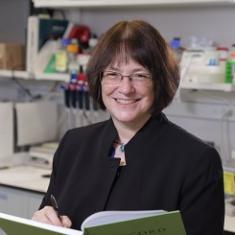 Our research is directed at combining classical and molecular genetic studies to fine-map, isolate, and characterize disease-trait loci associated with multistep models of cancer, with an emphasis on hematopoietic tumors. To this end, our lab is involved in mapping the chromosomal locations of genes associated with the susceptibility of BALB/c mice to the induction of mouse plasmacytomas. These B cell tumors are induced by a variety of agents including pristane, mineral oil, plastic discs or shavings, silicones, and retroviral constructs containing cooperating pairs of oncogenes. At least four distinct regions of the genome have been linked to pristane-induced plasmacytomagenesis in a series of intercross and backcross progeny derived from susceptible and resistant strains. Two of these genes (Pctr1 and 2) reside in noncontiguous, nonoverlapping segments of the distal half of mouse Chr 4. A third gene, Pctr3, resides in the interval of mouse Chr 4 between Pctr1 and 2. A fourth gene, Pctm, is linked to mouse Chr 1; tumor latency is also linked to mouse Chr 1. These genes reside in regions of the mouse genome that share linkage homology with human Chrs 1 and 9; a number of human malignancies, including multiple myeloma, have shown chromosomal abnormalities involving the human 1p region.

To map the positions of these genes more precisely, panels of congenic strains of mice (C.D2) have been constructed to contain regions of DBA/2 chromatin harboring the Pctr1, 2 and 3 resistance genes on a BALB/c background. In the Pctr1 region, single base pair substitutions in a candidate gene,Cdkn2a, have been shown to have functional differences at the protein level in in vitro kinase assays with the RB protein as substrate. Tumor incidence is higher and tumor latency is greatly reduced in Cdkn2a knockout mice, when compared with the tumor incidences and latencies seen in C57BL/6 mice. Cell cycle profiles in plasma cell lines transfected with wild-type (DBA) versus variant (BALB/c) p16 differed dramatically; DBA p16 induced cell cycle growth arrest. In contrast, BALB/c p16 did not. Physical mapping studies in the Pctr2 region have been completed, and mTOR was identified as a likely candidate gene for the Pctr2 locus. The BALB/c allele of mTOR was found to be less efficient than the DBA allele in phosphorylating 4E-BPI, and in suppressing ras transformation. BAC transgenics carrying the DBA allele on a BALB/c background exhibit decreased tumor incidence.

The CDK (p16/Rb/Cyclin D) and PI3K (mTOR, AKT) pathways implicated in mouse plasmacytomagenesis are frequently dysregulated in a number of human hematopoietic malignancies, including multiple myeloma, Burkitt's lymphoma and mantle cell lymphoma. We have recently identified a mTORi/HDACi drug combination, entinostat and rapamycin, that targets these pathways and limits cell growth and survival in these human malignancies.

Dr. Mock obtained her Ph.D. from the University of Maryland and continued her studies on the genetics of susceptibility to parasitic diseases in the Department of Immunology at the Walter Reed Army Institute of Research. Since coming to the NIH, she has focused her research on complex genetic traits associated with cancer initiation and progression in an effort to develop strategies for identifying and analyzing drug combinations to target susceptibility pathways.