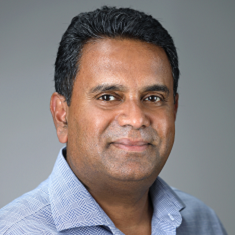 A majority of the eukaryotic genome is noncoding and only 2% represents protein-coding sequences. Among the several types of non-coding RNAs, microRNAs (miRNAs) and long non-coding (lncRNAs) have gained significant attention due to their roles in vital cellular functions, including proliferation and survival. MiRNAs directly bind to mRNAs to inhibit mRNA stability and/or translation. LncRNAs can activate or repress gene expression via diverse mechanisms including transcription and splicing. Deregulation of miRNAs and lncRNAs has been correlated with human diseases, including cancer. Recently, we and others have identified specific miRNAs and lncRNAs transactivated by p53, the most frequently mutated gene in human cancer. A deeper understanding of the biology of these miRNAs and lncRNAs is critical in determining their potential in cancer therapy.

The goal of my laboratory is to investigate the function of Regulatory RNAs in the p53 pathway and in colorectal cancer differentiation, an intriguing question in cancer biology and therapeutics. Mammalian miRNAs bind to target mRNAs via partial complementarity. A single miRNA can regulate the expression of hundreds of mRNAs. However, due to partial complementarity between a miRNA and its target miRNA, identifying miRNA targets is challenging (Thomas et al., Nat Struct Mol Biol, 2010). We have developed a biochemical approach to identify endogenous mRNAs bound to a transfected biotinylated-miR-34a (Lal et al., PLOS Genet, 2011). Combining this strategy with bioinformatics identified a network of genes and canonical pathways regulated by the p53-regulated miRNA miR-34a and the growth suppressor miR-24 (Lal et al., Mol Cell, 2009; Lal et al., Nat Struct Mol Biol, 2009). In addition, we have tumor suppressive functions of specific miRNAs in the p53 pathway such as the miR-183-96-182 cluster, miR-3189 and let-7i (Li et al., Mol Cell Biol, 2013, Jones et al, Cell Death Diff, 2015 and Subramanian et al, Oncogene, 2015).

More recently, we have identified several lncRNAs regulated by p53 during DNA damage in colorectal cancer cells. One such lncRNA that we named PINCR (p53-induced noncoding RNA) is in an intergenic region on the X-Chromosome. PINCR is a direct target of p53. Its expression is almost undetectable in untreated cells but it is induced about 100-fold after DNA damage (Chaudhary et al., eLife, 2017). We found that this lncRNA exerts a critical prosurvival function in colorectal cancer cells in vitro and tumor growth in vivo. Targeted deletion of PINCR significantly impaired G1 arrest and induced hypersensitivity to chemotherapeutic drugs. PINCR regulates the induction of a subset of p53 targets involved in G1 arrest and apoptosis, including BTG2, RRM2B and GPX1. Using a novel RNA pulldown approach that utilized endogenous S1-tagged PINCR, we found that PINCR associates with the enhancer region of these genes by binding to RNA- and DNA-binding protein Matrin 3 that, in turn, associates with p53. Our findings on the initial characterization if PINCR demonstrate a prosurvival function of a p53/PINCR/Matrin 3 axis in response to DNA damage. Ongoing follow-up studies are likely to uncover additional functions of this lncRNA.

The utilization of cell and molecular biological approaches to investigate lncRNA function and mode of action, combined with analysis of lncRNA expression in patient samples and in vivo studies in mice may help better understand their role in cancer pathogenesis.

Positions: To inquire about a postdoc or postbac position, please e-mail a cover letter and C.V. to Dr. Ashish Lal (ashish.lal@nih.gov).

Dr. Ashish Lal received his Ph.D. in Biotechnology from Banaras Hindu University, Varanasi, India. His interest in RNA biology started during his postdoctoral research in Dr. Myriam Gorospe’s lab at the National Institute on Aging, NIH. Before joining the NCI, he was an Instructor in the laboratory of Dr. Judy Lieberman at Harvard Medical School where he studied microRNAs in the p53 pathway and in differentiation. In September 2010, he moved to the NCI as Investigator and Head of the Regulatory RNAs and Cancer Section in the Genetics Branch. He received tenure in 2019. Research in his lab is focused on understanding on how gene expression is regulated in cancer, focusing on Regulatory RNAs and RNA-binding proteins in the p53 pathway and in the regulation of differentiation. He is an Associate editor for RNA Biology, Editorial board member for MCB and Reviewing editor for eLife.

This page was last updated on Thursday, September 8, 2022