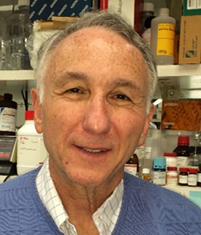 Alpha-beta T cells are unique in expressing antigen receptors that do not recognize 3-dimensional conformational antigenic shapes but instead recognize linear antigenic peptides bound to molecules of the Major Histocompatibility Complex (MHC).  This unique feature of T cell antigen recognition is known as MHC-restriction and imparts to T cells the ability to provide immune surveillance and to eliminate cells containing mutated proteins or viruses.  Because it is critical for T cell function, understanding the molecular basis for MHC-restriction is important for understanding T cell immunity.  We previously discovered that sequestration of the Lck protein tyrosine kinase by CD4 and CD8 coreceptor proteins in developing thymocytes limits thymic selection to MHC-restricted T cell receptors while coreceptor-independent Lck allows thymic selection of MHC-independent T cell receptors.  Consequently, we are now interested in exploring the specificity and function of MHC-independent T cell receptors for both conceptual reasons and for use as potential therapeutic reagents in cancer treatment.

Lineage Fate Determination in the Thymus

Positive selection in the thymus is signaled by T cell receptors and converts immature non-functional thymocytes into antigen-reactive mature T cells.  Based on the MHC-specificity of their T cell receptor, signaled thymocytes are directed to differentiate into either functionally distinct CD4/helper or CD8/cytotoxic mature T cells.  The mechanism by which that occurs is referred to as lineage fate determination.  Having previously discovered kinetic signaling as the basis for lineage fate determination in the thymus, we are now interested in determining how extrinsic signals transduced by the T cell receptor, CD4/CD8 coreceptor proteins, and cytokine receptors induce thymocytes to express different lineage-specifying transcription factors that direct differentiation into functionally helper or cytotoxic lineage T cells.  We are also interested in determining the mechanism by which different lineage-specifying transcription factors promote different developmental outcomes.

While positive selection is the step in the thymus that generates antigen-reactive mature T cells, negative selection is the step that eliminates T cells bearing T cell receptors with autoreactive potential from the functional T cell pool.  Clonal deletion of thymocytes with autoreactive potential requires costimulation and strong T cell receptor signaling during thymic selection and is only one aspect of negative selection.  Negatively selected thymocytes that survive clonal deletion can be ‘developmentally diverted’ in the thymus into non-dangerous T cell subsets.  For example, without costimulation, potentially autoreactive thymocytes are not clonally deleted but are developmentally diverted to become DN thymocytes that migrate to the gastrointestinal tract where they differentiate into CD8alpha-alpha intra-epithelial T cells that cannot cause systemic autoimmunity.  My laboratory is interested in determining the molecular basis of developmental diversion and in identifying other mechanisms of self-tolerance.

Dr. Alfred Singer is a renowned immunologist for his work on T cell development, signaling, and selection in the thymus.  He received his M.D. from Columbia University, his medical training at the Columbia-Presbyterian Medical Center, and his basic research training at Rockefeller University and the NCI.  He and his colleagues established the Experimental Immunology Branch in the NCI with the mission to perform innovative research in basic immunology and he was appointed its Branch Chief.  His research focuses on T-lymphocyte recognition and development, especially the molecular and cellular recognition signals that result in self/nonself discrimination, repertoire selection, and self-tolerance.  He is recognized for many innovative discoveries that elucidate how the thymus generates functional T cells reactive against foreign antigens while still being self-tolerant.

-       identification of CD8 lineage-specifying cytokines in the thymus

-       developmental diversion as the fate of thymocytes surviving negative selection

-       coreceptor tuning as the mechanism of peripheral T cell homeostasis

He has trained over 50 postdoctoral fellows, most of whom have become highly successful independent scientists and scientific leaders in both the United States and abroad.