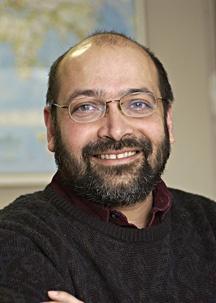 Cells divide, move, adhere and interact with their neighbors and their environment to determine the formation of multicellular organ systems with unique fates, morphologies, function and behavior. Our goal is to understand how such interactions determine the self-organization of cell communities in the nervous system of the zebrafish embryo. The lateral line is a mechanosensory system that helps determine the pattern of water flow over the fish and amphibian body. It consists of sensory organs called neuromasts that are distributed in a stereotypic pattern over the body surface. Each neuromast has sensory hair cells at its center and these sensory cells are surrounded by support cells, which serve as progenitors for production of more hair cells during growth and regeneration of neuromasts. The development of this superficial sensory system in zebrafish is spearheaded by the posterior lateral line primordia, groups of about 150 cells formed on either side of a day-old embryo near the ear. Cells in the primordia migrate collectively under the skin to the tip of the tail as they divide and reorganize to form nascent neuromasts that are deposited sequentially from its trailing end. Their journey is easily observed in live transgenic embryos with fluorescent primordium cells. Furthermore, a range of genetic and cellular manipulations can be used to investigate gene function and morphogenesis in this system. Understanding the self-organization of this relatively simple and accessible system in zebrafish serves as a model to elucidate the broader principles that determine cell fate specification, morphogenesis and collective cell migration in the developing vertebrate nervous system.

Dr. Ajay Chitnis completed his medical training at Grant Medical College, Mumbai in 1983 and then he spent a year at the National Institute of Mental Health and Neuroscience in Bangalore, before beginning his graduate work at the University of Michigan in 1985. Under the guidance of Dr. John Kuwada he showed how axon tracts established in the zebrafish brain by early developing neurons serve as a scaffold to guide growth cones of later developing neurons. Then, as a postdoctoral fellow with Dr. Chris Kintner from 1991-95 at the Salk Institute he showed that Notch signaling, originally identified in Drosophila, has a conserved role in mediating the process of lateral inhibition and determining when progenitor cells are allowed to differentiate as neurons in the Xenopus CNS. The complexity of trying to understand how the pattern of differentiated neurons emerges as a consequence of cell-cell interactions drew him to agent based programming languages like Netlogo, which he has since used to build computational models of various developmental events in the embryo. After a short second postdoctoral position with Dr. Wolfgang Driever, where he did a genetic screen to identify zebrafish with an aberrant pattern of early neurons, he established his Unit in the Laboratory of Molecular Genetics at NICHD in 1997. The screen led to the identification of an E3 ligase Mib1 as new component of Notch signaling pathway. It also led to the analysis of the headless mutant, which provided insight into mechanisms that divide the nervous system into compartments with distinct fate. Now a tenured Senior Investigator and Head of the Section on Neural Developmental Dynamics, Dr. Chitnis and his team are using a combination of cellular, molecular, genetic and computational approaches to understand how the posterior Lateral Line system is established by the posterior Lateral Line primordium as it migrates from the ear to the tip of the tail periodically depositing neuromasts.