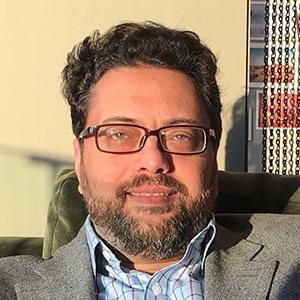 To develop noninvasive imaging approaches with high spatial (micro-millimeter) and temporal (milliseconds) resolution that allow multi-organ evaluation and analysis to better understand the interplay between atherogenesis and metabolic syndrome in humans. This is being achieved through new chemical spectroscopic techniques of involved organs (e.g. liver, heart and muscles) and improved imaging methodologies such as the development of free breathing methods (important for kids and adolescents) and high contrast techniques without the use of contrast agents. To that effect Dr. Gharib has championed the creation of a multidisciplinary team of imaging physicists, spectroscopists, biologists in order to establish the Biomedical and Metabolic Imaging Branch (NIDDK).

Dr. Gharib has capitalized on the unique environment at the NIH to develop this innovative approach, whereby patients with rare genetic mutations such as hyper immunoglobulin E (Job's) syndrome (immune system and coronary arteries), Turner's syndrome (genetics and vascular disease), lipodystrophy (metabolic dysfunction and cardiovascular disease), or HIV infection (inflammation and coronary disease) can be examined. These patients share many of the metabolic and immunological dysregulations encountered in multi-organ disease subjects inclusive of atherogenesis. Imaging methods also allow metabolic disorders to be phenotyped. For example, young HIV patients on long-term antiretroviral medications develop fatty livers as a result of their medications. Additionally, their T-cell dysfunction somewhat mirrors that seen in obesity affecting leptin metabolism. Finally, it is well established that such subjects acquire accelerated atherosclerosis. Therefore, a goal has been to isolate and understand the effects of these defects and the early events that signal atherosclerosis.

Together, with his experience in multi-modality imaging, Gharib and colleagues have developed new imaging techniques. Gharib et al were the first to apply both CT and MR coronary imaging in the same patients at the NIH and among the first to describe CT/MRI defined coronary abnormalities in patients with HIV, Job's syndrome and Cushing's syndrome. Further work has resulted in the development of a new technique to image the coronary vessels using high magnetic field MR scanners, allowing for the characterization of atherosclerotic coronary artery disease at an unprecedented MR resolution of 350 µm - without the need for ionizing radiation - allowing for early detection and monitoring of therapy. These techniques have also provided data for mathematical (finite element analysis) models that identify sites of maximum strain on the coronary arteries to predict points of potential atherosclerotic plaque accumulation and possible plaque vulnerability. The development and application of noninvasive coronary vessel wall imaging utilizing high temporal resolution (~20 milliseconds) allows for a more robust technique to look at segments of the coronary arteries. This technique is less affected by motion related distortions and is therefore able to reliably detect very early coronary artery thickening, an initial step in CAD development and progression. A patent application is pending for this new method which could potentially be used to characterize and study coronary artery disease and its response to various lipid lowering and anti-inflammatory therapies.

As part of the NIH obesity initiative, Dr. Gharib and his team have integrated the use of a large bore high magnetic field MR scanner with the use of a metabolic unit to characterize metabolic activity in subjects with a wide range of body mass indexes. An improvement and technical advancement in MR spectroscopy, developed by the lab, has also been applied to measure the fat in the heart, liver, pancreas and muscles, and to correlate measurements with metabolic activity. The capability to measure more that just fat (glycogen and choline) in the liver is unprecedented using proton spectroscopy. The opportunity to look at metabolites such as liver glycogen and choline opens the door for better understanding of lipid and glucose metabolism under a more controlled environment of a metabolic unit. Additionally, the introduction of new techniques for liver fibrosis assessment in these subjects using a high magnetic field and internal cardiac pulsation may allow for more comprehensive and early detection. Finally, these various novel MR techniques are modified and applied in a wide range of age groups using free breathing (vs. conventional breath-hold methods) which is both more comfortable and sustainable for patients enabling longitudinal studies in human subjects.

This contribution is important for the medical community and the public by introducing new methods to the NIH scientific community that are likely to be adopted by outside medical institutions. To this effect Dr. Gharib has been recognized by the National Institutes of Health Director's Award in 2013: "For development of cutting edge, non-invasive imaging technologies permitting drastically improved resolution and disease detection while reducing the risk to patients". This cross talk between diseases of multiple organs underlies the need for a modern systems approach to investigation and diagnosis. The availability of a multimodality imaging approach provides improved understanding of the effects of deregulation of metabolism, inflammation and immunity that play a key role in multi-organ disease progression inclusive of atherosclerosis in obesity and metabolic syndrome.