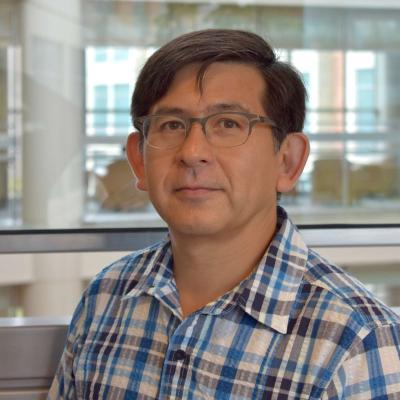 Ribonucleic acids (RNA) are remarkable molecules. In addition to serving their classical role as carriers of genetic information, they are also cellular machines that perform enzymatic functions previously only ascribed to proteins. Furthermore, since RNA molecules are simultaneously capable of carrying genetic information and functioning as catalysts, they can be subjected to evolutionary selection pressures and may have formed the basis for ancestral life. Finally, RNA’s central role in life suggests that its potential therapeutic value is barely tapped but already clinically validated: approximately 80 percent of antibiotics in use today target a single type of RNA-containing enzyme, the ribosome, and most do so by targeting its RNA component.

Dr. Ferré-D’Amaré studies RNA molecules in their many guises. His laboratory develops and exploits fundamental biophysical approaches to understanding the function of ribozymes (catalytic RNAs) and the interactions between RNA and proteins at the level of atomic structure. Dr. Ferré-D’Amaré is also interested in the role of RNA molecules in gene regulation and signal transduction (e.g. mRNA riboswitches that directly bind to small molecule metabolites and modulate transcription, translation, or splicing). He and his colleagues focus on the way RNA molecules fold into three-dimensional structures and how they are modified post-transcriptionally. Finally, he uses the dual function of RNA molecules as information carriers and catalytic agents to artificially evolve them and study their properties.

Among his many research interests, Dr. Ferré-D’Amaré has three programs with strong translational implications. The first is an active drug discovery initiative for small molecules that bind to riboswitches. Riboswitches have been largely ignored as targets for drug discovery, yet their central role is clear in clinically important phenomena such as bacterial biofilm formation. Biofilms are assemblages of bacteria that adhere to biological and non-biological substrates and resist existing treatment. Their formation is regulated by cyclic-di-GMP-sensing riboswitches. Dr. Ferré-D’Amaré's laboratory has identified many compounds that bind specifically to bacterial riboswitches. He is currently developing these leads into more potent molecules, in collaboration with colleagues at Cambridge University.

Unlike mammalian cells, bacteria and yeast have rigid cell walls that form a protective exoskeleton. Dr. Ferré-D’Amaré’s second translational research focus is on the role of a catalytic RNA—glmS—in controlling the synthesis of the bacterial cell wall. GlmS operates not only as a catalytic RNA but also as a riboswitch and controls cell wall biosynthesis in response to certain small molecules. By determining their crystal structures in multiple functional states, Dr. Ferré-D’Amaré's laboratory has generated "molecular movies" of glmS ribozymes in action. These studies have revealed how the glmS ribozyme can employ a small molecule as a coenzyme. The glmS ribozyme is being studied as a potentially valuable target for novel antibiotics, and also an experimental platform with which to understand how RNA targets can evolve antibiotic resistance.

Finally, Dr. Ferré-D’Amaré's interest in RNA-protein interactions has led him to study box H/ACA RNP, a ribonucleoprotein (RNP) complex that regulates the assembly of telomerase. Telomerase is an enzyme not only responsible for maintaining healthy telomere "caps" on the ends of chromosomes but also for maintaining normal cellular proliferation, and maladaptive sustenance of cancer progression. A second RNP complex under study influences the formation of new blood vessels in health and in conditions such as myocardial ischemia and cancer by regulating production of vascular endothelial growth factor (VEGF). Dr. Ferré-D’Amaré and colleagues study the atomic basis of specificity between the proteins and their cognate RNAs that leads to the formation of these biologically important RNP complexes, with the ultimate goal of achieving atomic level control over these interactions.

Adrian R. Ferré-D'Amaré graduated from the Instituto Tecnológico y de Estudios Superiores de Monterrey in Mexico in 1990 with a B.S. in chemistry. He earned a Ph.D. in molecular biophysics from the Rockefeller University in 1995. He was a Jane Coffin Childs postdoctoral fellow at Yale University from 1995 to 1999. Dr. Ferré-D'Amaré was a Member of the Fred Hutchinson Cancer Research Center and an Affiliate Professor of Biochemistry at the University of Washington, Seattle, from 1999 to 2011. He was also an Investigator of the Howard Hughes Medical Institute from 2008 to 2011. He joined the NHLBI in 2011 as a Senior Investigator and Chief of the Laboratory of RNA Biophysics and Cellular Physiology. Dr. Ferré-D'Amaré received the Eli Lilly and Company Research Award from the American Society for Microbiology in 2004 and was a Distinguished Young Scholar in Medical Research of the W.M. Keck Foundation from 2003 to 2008. Dr. Ferré-D'Amaré has authored or coauthored more than 80 papers. He sits on the editorial board of the journal RNA and is an ad hoc reviewer of the NIH's Biological Chemistry and Macromolecular Biophysics Study Section and the National Science Foundation's Biophysics Program, Division of Biology.