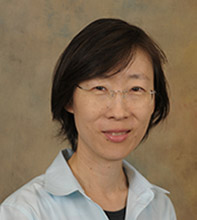 Laboratory of Molecular Biology and Immunology

Single cell approaches using fluorescent microscopy and mathematical modeling are necessary to decipher how transcription factors interpret and transmit the contextual information to downstream gene regulation. Fate-determining signaling information may be encoded in dynamic features of activity (such as frequency, duration, and amplitude), rather than biochemical features, for transcription factors that serve as signaling hubs. NF-κB is an important signaling hub for immunity and cell survival, which responds to diverse stimuli. Dr. Sung and colleagues demonstrated that cell-intrinsic oscillations, well-recognized for the circadian clock and the cell cycle network, also occur in nuclear occupancy of endogenous NF-κB in response to a cytokine stimulus. By using knock-in mice that express fluorescent NF-κB from the native locus and live cell imaging analysis, she observed that oscillations of NF-κB are sustained in TNF-α treated fibroblasts. This finding raises questions as to what the function of oscillations is in various signaling contexts. In the same study, she and her colleagues also conducted a comprehensive analysis of NF-κB dynamics in vivo, encompassing timescales from seconds to hours. This work laid a foundation for systems biology of NF-κB, a critical mediator of inflammation and cell survival, based on real time dynamic measurements from living cells. More recently Dr. Sung investigated NF-κB dynamics in immune cells called macrophages which can engulf bacteria after sensing their molecular patterns via the cell surface receptors. Sub-critical doses of the bacterial component LPS induced predominantly negative feedback genes in the NF-κB regulatory module and genes with conflicting functional consequences, preventing a coherent response in macrophages. However, above a critical dose, LPS results in the amplification of NF-κB through transcriptional activation of RelA, a ubiquitously active subunit of NF-κB. This finding represents the first example of stimulus-induced transcriptional activation of RelA. The newly found positive feedback helps overcome the various negative feedback loops and enable a full-blown innate immune response. These multidisciplinary investigations exemplify how quantitative single-cell analysis can lead to a series of unexpected discoveries even from an extensively studied molecular system.

Recent breakthroughs in genomic tools have greatly expanded our ability to investigate chromatin characteristics that correspond to cell state-specific genome regulation. The current high throughput sequencing methods produce unprecedented amounts of epigenomic data. Dr. Sung has developed statistically robust bioinformatics methods to detect significant regions in the genome from DNase-seq data, both at the level of nucleosomes and at the nucleotide level. Her “DNase2TF” program was ranked in the top two public analysis software packages in an exhaustive comparison of existing algorithms in terms of speed and accuracy for the detection of transcription factor “footprints” corresponding to their chromatin occupancy observed by ChIP-seq. Extracting meaningful information and patterns the data requires not only sophisticated software and computational tools, but also interpretation through integrating knowledge from complementary approaches. Dr. Sung and colleagues showed that the extent of footprint depth for transcription factors depends on their DNA binding residence times measured by live cell microscopy techniques such as single molecule tracking and FRAP (fluorescence recovery after photobleaching). This work revealed a previously unappreciated limitation of the genomic footprinting method regarding transcription factors with highly dynamic interactions with target chromatin.

It is anticipated that utilizing these two frameworks, single cell dynamics and epigenomic analysis, will provide unprecedented insight into the systems basis of how the genome is altered in autoimmune diseases, inflammatory malignancies, and aging.

Dr. Sung received her Ph.D. in Mathematics from SUNY at Stony Brook and pursued her postdoctoral training in Dr. James Yorke's nonlinear dynamics group at the University of Maryland, College Park. Dr. Sung transitioned to biology when she started in the bioinformatics group of Dr. Richard Simon at NCI, and then worked as a Staff Scientist in the branch of Dr. Gordon Hager, CCR/NCI, between 2005 and 2015. She began her independent investigator position at LMBI, NIA, Baltimore, in the fall of 2015.

This page was last updated on September 1st, 2020