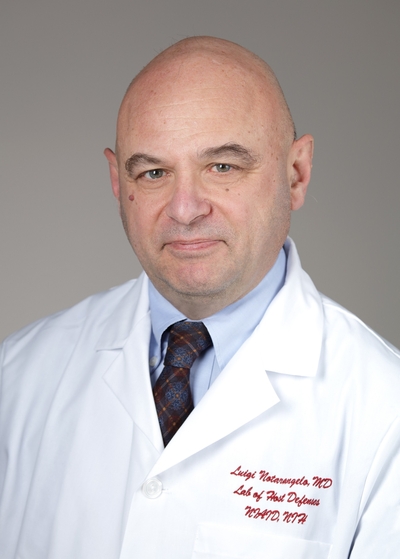 The main goal of the Immune Deficiency Genetics Section (IDGS) is to characterize the molecular and cellular mechanisms underlying primary immune deficiencies, and combined immunodeficiencies (CID) in particular, with the ultimate objective of improving diagnosis and treatment of these conditions.

In addition to increased susceptibility to infections, patients with CID often manifest immune dysregulation, with autoimmune cytopenias and organ-specific autoimmunity. We study both patients with yet genetically undefined forms of CID and patients with known gene defects. In the former group of patients, we use unbiased genomic approaches (whole exome sequencing) and a wide array of cellular and molecular techniques (flow cytometry; in vitro assays to explore the function of T, B, and NK cells; high-throughput analysis of T- and B-cell repertoire; analysis of a broad panel of autoantibodies; generation and targeted differentiation of induced pluripotent stem cells) to identify novel gene defects. Using this approach, the laboratory has identified several new gene defects, including DOCK2 deficiency, TTC7A deficiency (responsible for combined immune deficiency and intestinal atresias), HOIP deficiency (a cause of immune deficiency and autoinflammatory disease), and EXTL3 deficiency (associating severe T-cell immunodeficiency, skeletal dysplasia, and neurodevelopmental delay). The laboratory has a strong interest in defining the molecular and cellular defects in newborns identified with T-cell lymphopenia after newborn screening at birth.

We also aim to define the mechanisms underlying immune dysregulation in patients with CID of known genetic etiology. In this regard, the laboratory has a special interest in human RAG deficiency and in other defects of V(D)J recombination. Using a powerful in vitro platform, we have determined that the severity of clinical manifestations associated with mutations in the RAG, DCLRE1C, and LIG4 genes correlates with the residual activity of the mutant protein and with different degrees of perturbation of T- and B-cell repertoire diversity and composition. Ongoing work in the laboratory is focused on testing the hypothesis that mutations in the coding flank sensitive region of RAG1 (that interacts also with coding regions of the immunoglobulin and T-cell receptor genes) may alter selection of V, D, and J genes targeted for rearrangement and thereby alter repertoire composition, causing a breakage of tolerance. To this purpose, we take advantage of a large collaboration with other investigators at the Laboratory of Clinical Infectious Diseases within NIAID, as well as with several groups worldwide. These human studies are complemented by similar efforts in novel animal models. In particular, we have used CRISPR to generate mouse models with hypomorphic mutations in the coding flank sensitive region of Rag1, whose phenotype includes immunodeficiency and autoimmunity.

Finally, the laboratory has developed a large repository of induced pluripotent stem cells (iPSCs) from patients with CID and with other immune deficiencies. By attempting targeted differentiation of control- and patient-derived iPSCs, we aim to define the pathophysiology of immune and extra-immune manifestations of disease, as already shown by our group for reticular dysgenesis, RAG deficiency, defects of non homologous end joining, and EXTL3 deficiency. The laboratory is interested in applying CRISPR technology to correct the gene defect in patient hematopoietic stem cells and iPSCs, as a first step toward a future therapeutic use of this strategy.

Luigi D. Notarangelo received his M.D. from the University of Pavia, Italy. After completing training in pediatrics, subspecialty training in allergy/immunology, and human genetics at the University of Pavia and a postdoctoral internship with David Nelson, M.D., at the Metabolism Branch, National Cancer Institute, he was appointed associate professor and subsequently full professor of pediatrics at the University of Brescia, Italy, where he chaired the department of pediatrics between 2000 and 2006. In November 2006, he joined the division of immunology at Boston Children’s Hospital, Harvard Medical School, as professor of pediatrics. In October 2016, he joined the Laboratory of Host Defenses.

Dr. Notarangelo is a leader in the study of the molecular and cellular mechanisms of human primary immune deficiencies and in the treatment of these disorders. He has served as president of the European Society for Immune Deficiencies and of the Clinical Immunology Society. He has received numerous national and international awards.