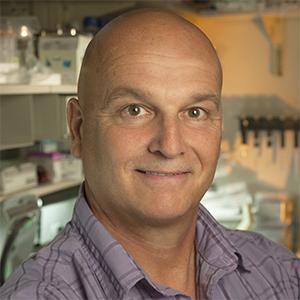 The Genomics, Development and Disease Section (GDDS; originally called the Mouse Embryology Section) was established in 1994 on the foundation that transformative and translational discoveries will be revealed through the application of advanced genetic and genomic approaches to the study of mouse genetic mutants that model human disease traits. The section uses a wide array of genomic tools along with the genetic manipulation of model systems to discover genome function and to dissect gene regulatory pathways in development and disease.

The main areas of research interest are the genetics of pigmentation and its diseases and the lysosomal storage disease Niemann-Pick disease, type C (NPC). With the ultimate goal of annotating human genome function with an emphasis on understanding and treating human diseases, Dr. Pavan's work is focused on transformative research that will provide insights into mammalian developmental pathways, disease pathology and therapeutic interventions. This approach has been highly successful, and has led to discovery of critical genetic components needed for normal development and/or postnatal homeostasis in 20 mouse mutant strains, with over half of these being instructive regarding orthologous human diseases. In 1998, Dr. Pavan's section discovered that mutations of the HMG-box transcription factor SOX10 result in neural crest stem cell defects in mice that accurately model enteric nervous system deficiencies in Hirschsprung (HSCR) disease and melanocyte deficiencies of Waardenburg (WS) syndrome. Subsequently, germline SOX10 mutations were identified in individuals with WS-HSCR disease. Next, the GDDS worked with the NHGRI genomics and embryology core facilities to develop technologies to further examine the transcriptional target genes of SOX10 in stem cell biology and explore SOX10's relationship to other HSCR and WS disease genes.

In 1997, Dr. Pavan's group used a mouse mutant that modeled the neurodegenerative and associated cholesterol and glycolipid storage defects of NPC to discover the underlying molecular defect in the protein NPC1 that was responsible for the disease traits. They went on to use this information to reveal that the orthologous human gene NPC1 is also mutated in individuals with NPC. Further animal modeling studies demonstrated that neuronal-targeted expression of NPC1 rescued neurodegenerative disease, essential information for designing therapeutic interventions.

More recently, the Pavan group has further explored these pathways in development and disease as well as developed genetic screens to identify additional disease pathway components. Routinely they have occupied the forefront of research innovation by using high-risk screens to identify major modifiers of primary genetic defects. They have expanded understanding of SOX10's contribution to human disease by demonstrating that somatic mutations of SOX10 are rarely present in human melanoma, the most lethal form of skin cancer in the United States that is increasing in incidence worldwide. They went on to demonstrate that reduction of SOX10 causes melanoma cells to undergo cellular growth arrest and senescence, suggesting maintenance of SOX10 expression is important for melanoma progression.

These findings led to the hypothesis that altering SOX10 levels in melanoma may alter melanomagenesis. To identify SOX10 modulatory factors, they used comparative genomic sequencing analyses and zebrafish transgenic technologies to reveal cis-acting genomic elements that regulate SOX10 expression. To identify SOX10 target genes, they built genomic resources to interrogate transcriptional regulatory pathways in development and melanoma, integrating ChIP-Seq, in vivo modeling, computational analyses and machine learning to identify a predictive sequence vocabulary involved in melanocyte gene expression. Dr. Pavan's group also analyzed genome-wide chromatin modifications using ChIP-Seq analyses in multiple studies that utilized genetic manipulations, such as loss- and gain-of-function SOX10 alleles, and candidate pharmacological interventions. These studies identified genome-wide patterns of SOX10 binding and putative SOX10 target regulation, and also revealed a melanocyte-specific, Hif1a-regulated expression profile under hypoxia in melanoma tumors. Dr. Pavan's group has further examined the links between melanocyte development and melanoma by identifying modifiers of SOX10 in adult melanocyte stem cells (MCSC) and melanoma. One of these studies identified in vivo genetic modifiers of hair graying, including the discovery of a role for the innate immune system in a novel mouse model of hair graying. These results will allow future discovery of genetic pathways that impact adult MCSC and may have far-reaching impact towards understanding adult stem cells, regeneration medicine, and melanoma research. To identify trans-acting components that synergize with SOX10 stem cell function and thus may be targets for intervention in melanoma procession, Dr. Pavan's group established a SOX10-sensitized genetic screen. From this screen, nine mutant loci were identified that targeted multiple biological pathways; examples included identification of a role for the exon junction complex in stem cell maintenance and DNA integrity, discovery that NRG1/ERBB3 pathway activation is required in order to retain stem cell fate and is re-activated during human melanoma progression, and expansion of the repertoire of RPS-associated phenotypes of Diamond-Blackfan anemia to include CNS and morphological traits in RPS7 mutations.

The Pavan group's NPC work has continued in a multi-lab effort aimed at developing and assessing effective NPC treatment strategies. This has involved collaborations with the NIH's National Chemical Genomics Center to identify candidate therapeutic compounds via high-throughput screens, its Therapeutics for Rare and Neglected Diseases program to bridge the gaps between basic discoveries and clinical trials, and NIH Clinical Center physicians for identification of biomarkers and bioassays as well as evaluation of compounds in NPC disease patients. They have also collaborated in establishment of a natural history study to identify screening criteria and biomarkers for use in gauging therapeutic interventions.

Current studies in the GDDS focus on transformative research that will simultaneously reveal new details of development and disease pathways and also provide candidate pathways for evaluation in human therapeutic interventions. Dr. Pavan's group has collaborated to identify expression quantitative trait loci (eQTL) in a large cohort of primary melanocytes, revealing extensive data on the regulatory landscape of melanocyte gene expression. This dataset is being used to examine the genetic variation associated with human pigmentation and albinism, to extend our knowledge of the genetic pathways that affect both the wide range of human pigment variation as well as pigment-associated diseases. Dr. Pavan's group has recently undertaken a series of studies on genes involved in production of the red-yellow pigment pheomelanin. These studies have demonstrated that the gene MFSD12 affects pheomelanin pigment and is responsible for the phenotype of the classical mouse mutant grizzled; furthermore, a collaborative study found that human MFSD12 is located near a locus associated with variation in pigmentation in African populations, indicating the relevance of this pigmentation pathway to human pigmentation. Future studies involve using CRISPR/Cas9 techniques to generate a series of pheomelanin-related mouse mutants on a consistent inbred strain background, in order to perform comparative analyses of mouse mutants that affect pheomelanin production, and also evaluate the effects these gene mutants have on other tissue types. Together, these studies will increase understanding of the genetic regulation of human pigment variation and associated skin cancer risks, as well as provide animal models for future studies of drug intervention.

Dr. Pavan's group continues to identify compounds for treatment of NPC and assess these compounds in animal models with the goal of translating this information into clinical trials at the NIH. In particular, they are evaluating and improving gene therapy for NPC disease treatment in mouse models of NPC disease. They are testing various adeno-associated virus vector types (AAV9) and also varied delivery methods to NPC1 mouse mutants, then evaluating efficacy of treatment. They have found that AAV9-directed gene therapy can increase the lifespan of NPC1 mutant mice, and also improve neuronal and liver abnormalities. These studies are crucial steps that are needed to guide future clinical trials for NPC1 gene therapy in NPC patients. Collectively, these studies are designed to utilize the most current genomic technologies in combination with mouse models to facilitate effective disease therapy in the future.

Dr. William Pavan received his B.S. in animal science from the University of Massachusetts, Amherst and his Ph.D. in physiology from the Johns Hopkins School of Medicine, Baltimore. He completed his post-doctoral fellowship in the laboratory of Shirley Tilghman, Ph.D., at Princeton University in which he studied the developmental genetics of mouse coat color pigmentation.

Subsequently, Dr. Pavan joined NHGRI in 1994, when he began a research program focused on using genomic tools and genetic manipulation of model systems to decipher genome function and to dissect gene regulatory pathways in development and disease. His primary areas of interest include the development and diseases of melanocytes, the cells responsible for pigmentation of skin and hair, as well as the lysosomal storage disorder Niemann-Pick disease, Type C.