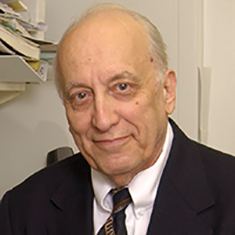 The IL-2/IL-15 Receptor System in the Life and Death of Lymphocytes: A Target for Cancer Therapy and Vaccine Design

Our work on basic and clinical immunology focuses on the regulation of the human immune response and how its dysregulation can lead to autoimmune, immunodeficiency and malignant disorders. We apply insights gained in our fundamental research to the development of new approaches to the treatment of patients.

A major area of our efforts focuses on the critical role played by the receptor for interleukin-2 (IL-2) on the growth, differentiation and regulation of normal and neoplastic T-cells. We defined the IL-2 receptor subunits IL-2R beta and IL-2R alpha using the first reported anticytokine monoclonal antibody (anti-Tac) that we developed. This was followed by our molecular cloning and expression of this receptor. These studies have culminated in the definition of the IL-2R as an exceptionally valuable target for the therapy of leukemia and autoimmune diseases.

The scientific basis for this approach was our demonstration that normal resting cells do not express IL-2R alpha whereas it is expressed by abnormal T-cells in patients with lymphoid malignancies. We introduced different forms of IL-2R-directed therapy, including unmodified antibodies to IL-2R alpha (anti-Tac, the first antibody to a cytokine receptor to receive FDA approval), humanized anti-Tac (daclizumab, Zenapax) and the antibody armed with toxins or alpha and beta-emitting radionuclides. We showed that humanized anti-Tac contributes to reducing renal transplant rejection. The FDA then approved daclizumab for use in humans to prevent acute kidney transplant rejection. In addition, we showed that humanized anti-Tac is of value in the treatment of such T-cell-mediated autoimmune disorders as noninfectious uveitis and multiple sclerosis. Furthermore, we demonstrated that anti-Tac (daclizumab) provides effective therapy for a subset of patients with a previously fatal leukemia, HTLV-I associated adult T-cell leukemia (ATL).

In a pivotal recent finding, we demonstrated that refractory and relapsed Hodgkin's lymphoma (HL) patients could be effectively treated with daclizumab armed with Yttrium-90. This study's scientific basis was that most normal cells do not express CD25, whereas it is expressed by some Reed-Sternberg cells and by rosetting polyclonal T-cells in lymphomatous masses. Yttrium-90 provides strong beta emissions that kill tumor cells at a distance by crossfire. In 30 HL patients treated with 90Y-daclizumab, there were 7 partial and 12 complete responses. Responses were seen among the patients whose Reed-Sternberg cells were CD25 negative, provided that the associated rosetting T-cells expressed CD25. Thus, repeated 90Y-daclizumab infusions predominately directed toward non-malignant T cells rosetting around Reed-Sternberg cells provided effective therapy for most HL patients.

In a most critical development, Dr. Waldmann co-discovered the cytokine IL-15 and elucidated its role in the development of NK and CD8-memory T cells. He demonstrated that IL-15 binds to beta and gamma chains also present in IL-2 receptors. Despite this sharing of receptor components, Waldmann showed that IL-2 and IL-15 make distinct contributions to adaptive immune responses. IL-2, through its induction of regulatory T cells and activation-induced cell death (AICD), acts as an immunological checkpoint required for self tolerance. In contrast, IL-15 inhibits AICD and favors survival of CD8-memory cells and is thus dedicated to supporting persistence of an immune response.

To circumvent the immunological checkpoints mediated by IL-2, Waldmann used IL-15 in lieu of IL-2 in treatment of malignancy in mice and found it effective. Waldmann has directed the cGMP production of IL-15 and has completed a clinical trial using IL-15 in therapy of patients with metastatic malignant melanoma and renal cell cancer. Furthermore, Waldmann demonstrated that vaccines containing IL-15 induced long-lasting, high-avidity CD8-mediated CTL immunity, whereas T-cell immunity mediated by IL-2 was short lived. Thus Waldmann's proposal to incorporate IL-15 into molecular vaccines may represent a major advance in the therapy of cancer, AIDS and in vaccine design.

Another major focus of the Waldmann laboratory has been on adult T-cell leukemia that develops in individuals infected with the retrovirus human T-cell lymphotropic virus-1 (HTLV-1). Dr. Waldmann demonstrated that the HTLV-1 encoded protein Tax constitutively activates two autocrine (IL-2R/IL-2, IL-15R/IL-15) and one paracrine (IL-9) system that in turn activate the JAK/STAT pathway. This made JAK1 and JAK3 potential therapeutic targets for ATL.

Dr. Waldmann demonstrated that the pan-JAK inhibitor tofacitinib and the JAK1/2 inhibitor ruxolitinib profoundly inhibited the ex vivo proliferation of peripheral blood mononuclear cells (PBMCs) from patients with smoldering and chronic types of ATL. On the basis of these preclinical studies, Waldmann initiated a phase II trial of ruxolitinib in patients with smoldering and chronic ATL. Furthermore he has used high-throughput screening platform with the JAK1/2 inhibitor ruxolitinib combined with 466 potential therapeutic agents and identified ruxolitinib and navitoclax as an attractive combination therapy for ATL. These studies provide support for a therapeutic clinical trial that involves the combination of a JAK1 inhibitor with the Bcl-xL inhibitor in patients with ATL.

Collectively, Waldmann's 50-year scientific odyssey has included many discoveries that have led to applications in the fields of organ transplantation, autoimmune disease and cancer. He has dominated the fields of IL-2 and IL-15, cytokines that control the immune response, and he has defined disorders in these cytokines underlying T-cell leukemogenesis. Thus, Waldmann is a pioneer and leader in producing the explosion of knowledge about cytokines and their receptors and in the coming of age of monoclonal antibodies, now a dominant form of cancer immunotherapy. He has had a lasting impact in the cancer field and has demonstrated a lifetime commitment to fighting cancer.

Dr. Waldmann received his M.D. from Harvard Medical School. He joined the NCI in 1956 and was chief of the Lymphoid Malignancies Branch (formerly Metabolism Branch) from 1973-2020. He studies the IL-2/IL-2 receptor system in the growth of normal and neoplastic cells. He co-discovered IL-15 and introduced rhIL-15, IL-2/IL-15R (CD122), Hu-Mik-Beta-1-directed therapy for cancer and autoimmune diseases. He has initiated clinical trials employing IL-15 in the treatment of metastatic malignancy. His honors include the Ehrlich medal; the Stratton, Lila Gruber, Simon Shubitz, Milken, Artois-Baillet Latour, and Bristol-Myers Squibb prizes; AAI-Dana Foundation Award in Human Immunology Research; and election to the National Academy of Sciences, American Academy of Arts and Sciences, Institute of Medicine, and the Royal Society of the Medical Sciences UK.