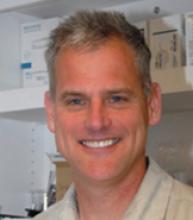 We are investigating Coxiella burnetii, a bacterium that causes a severe flu-like illness called Q fever. Humans typically acquire the pathogen through inhalation of contaminated material generated by infected domestic livestock. Coxiella is also a recognized category B biothreat with potential for illegitimate use. During infection, the organism invades macrophages, where it directs formation of a lysosome-like parasitophorous vacuole (PV) in which to replicate. A mature PV containing hundreds of organisms can occupy nearly the entire host cell cytoplasm in the absence of obvious cytopathic effect. Coxiella’s resistance to the harsh conditions of its PV also correlates with spore-like environmental stability. Because PV biogenesis, host cell maintenance, and generation of developmental forms adapted to intracellular replication and extracellular resistance are central to Coxiella pathogenesis, we are conducting studies to better understand the molecular and cellular biology of these processes. Moreover, we are investigating the extent and relevance of Coxiella strain diversity and developing genetic methods to dissect the virulence of this refractory pathogen. In addition to providing needed information on pathogen biology, our research goals are aimed at development of new Coxiella countermeasures, such as rationally designed subunit vaccines and tools for molecular epidemiology.

Host interactions
Coxiella has the extraordinary ability to replicate within a vacuole with lysosomal characteristics. Our results indicate that modulation of host cell functions by Coxiella proteins is required for PV formation and pathogen growth. Using contemporary cell biology techniques, we are characterizing the Coxiella PV to define both bacterial and host factors that mediate its formation. Moreover, using new genetic tools are being employed to characterize proteins that are secreted into the host cytosol by a specialized Dot/Icm type IVB secretion system. Functional characterization of these effector proteins and their cellular targets will provide important insight into Coxiella virulence mechanisms.

Dr. Heinzen received his Ph.D. in microbiology from Washington State University in 1991. After completing an Intramural Research Training Award fellowship in the Laboratory of Intracellular Parasites at the National Institutes of Health (NIH) in 1996, Dr. Heinzen joined the faculty of the molecular biology department at the University of Wyoming, where he was awarded tenure in 2002. Dr. Heinzen was recruited to NIH in 2003 as head of the new Coxiella Pathogenesis Section, where he was awarded tenure in 2010 and promoted to senior investigator. Dr. Heinzen has served on the executive council for the American Society for Rickettsiology. In 2011, Dr. Heinzen was elected fellow of the American Academy of Microbiology in recognition of his studies on Coxiella and Rickettsia pathogenesis.