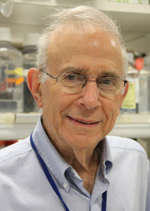 As prototypical cellular motor proteins, most myosins convert the energy of ATP into movement. Contractile muscle myosin II proteins participate in the beating of the heart and movement of the body, while non-muscle myosin IIs play an integral role in cellular movement, shape regulation, and division. Dr. Adelstein’s laboratory is focused on the role of non-muscle myosin II (NMII) in development and disease.

Three genes—MYH9, MYH10, and MYH14—encode the heavy chains of the individual NMII proteins: NMII-A, NMII-B, and NMII-C, which are composed of both heavy and light chains. Dr. Adelstein and colleagues first described the phosphorylation and regulation of NMII ATPase activity in a seminal Nature paper in 1975. His laboratory has subsequently shifted its emphasis from predominantly biochemical approaches to transgenic mouse studies. By systematically ablating each of the heavy chain genes alone and in combination, Dr. Adelstein and his colleagues have discovered critical roles for NMII-A and NMII-B in early embryonic development, including a requirement for NMII-A in the visceral endoderm and placenta and for NMII-B in the normal development of the heart and brain.

It has been known for several years that single amino acid mutations in MYH9 lead to a human disease syndrome called MYH9-RD that includes abnormalities of the kidneys, platelets, lens of the eye, and the inner ear. Dr. Adelstein and his colleagues have generated transgenic mice that duplicate the human mutations and recapitulate the major features of the human disease. They use these animal models to study the molecular and cellular mechanisms that give rise to the specific defects.

Dr. Adelstein and colleagues first studied mutations in MYH10 that lead to strikingly abnormal heart development in the mouse—the heart develops outside of the body (ectopia cordis) due to a failure of ventral wall closure. In rare instances, children are born with and surgically treated for the same unusual defect. Coming full circle, Dr. Adelstein’s laboratory is now analyzing rare clinical samples obtained from children with a related developmental syndrome of the abdominal region, Pentalogy of Cantrell, for mutations in MYH10.

The laboratory’s work on the regulation of gene expression of NMIIs has led them to find tissue-dependent and developmental stage-dependent alternatively spliced isoforms of NMIIs. Both NMII-B and NMII-C have distinct alternative splicing patterns of their heavy chains that affect their regulation and function.

Ultimately, Dr. Adelstein hopes that his work on the basic mechanisms of myosin proteins underlying development and disease will lead not only to a specific understanding of rare diseases but also to broader therapeutic application. For example, the kidney defects that result from single mutations in MYH9, namely glomerulosclerosis, are also observed in diseases such as diabetes and hypertension. By studying the early stages of disease in mouse models, Dr. Adelstein wants to derive clinical insights that contribute to the development of therapeutic interventions.

Robert Adelstein graduated from Harvard Medical School with a M.D. in 1959. He did his internship at Bellevue Hospital in New York and Duke Hospital in Durham, NC, his junior medical residency at Bellevue, and his senior residency at Duke. He arrived at the NIH in 1961 as a Research Associate and worked with Wayne Kielley in Chris Anfinsen’s lab (NHLBI). He conducted postdoctoral research with Edmond Fischer in the Department of Biochemistry at the University of Washington from 1966 to 1968 and was on sabbatical in Howard Cedar’s lab in Jerusalem from 1983 to 1984. He has been Chief of the Laboratory of Molecular Cardiology since 1981. Dr. Adelstein has authored or coauthored more than 200 papers. He has served as a member of the Editorial Board of the Journal of Biological Chemistry for over 15 years. Dr. Adelstein is a member of the Biophysical Society, American Society for Biochemistry and Molecular Biology, American Society for Clinical Investigation, American Association for Advancement of Science, and American Society for Cell Biology. He was a member of the Molecular Cytology NIH study section from 1981 to 1985, and until recently, was on the board of the American Heart Association’s Basic Cell Peer Review Committee. He has been an ad hoc member of NIH’s Central Tenure Committee since 2005 and has chaired two NHLBI tenure-track searches.