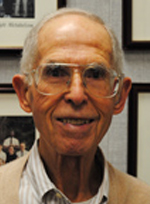 Dr. Burg is a renal physiologist who has made seminal and significant contributions to the field in two major areas. First, he invented a method to dissect viable renal tubules and perfuse them in vitro, measuring transport of substances between the tubule lumen and peritubular side. Using this method, he and others have determined what is transported by each of the many different nephron segments, how it is transported, and how the transport is regulated. This information has been fundamental for our current understanding of how the kidney functions in health and disease. Second, his lab is currently investigating the mechanisms by which kidney cells protect themselves from the very high renal medullary interstitial concentrations of salt and urea that power concentration of the urine.

Dr. Burg’s group has identified several protective organic osmolytes (sorbitol, glycine betaine, glycerophosphocholine (GPC), and myo-inositol) that the renal cells accumulate during antidiuresis and have elucidated the mechanisms by which they are accumulated. For example, high NaCl increases synthesis of sorbitol and GPC by increasing levels of aldose reductase and neuropathy target esterase (NTE, a phospholipase B), respectively; high NaCl also increases the transport of glycine betaine and myo-inositol into the cells by increasing the abundance of their transporters. Dr. Burg’s group has also identified osmotic response elements (OREs) in the genes for aldose reductase and NTE, as well as the osmolyte transporter genes. They are currently studying the role of the transcription factor NFAT5 in this process. High salt increases phosphorylation of NFAT5, which in turn stimulates its localization to the nucleus, its binding to OREs, and its transactivating activity. Dr. Burg’s lab has identified the amino acids in NFAT5 that become phosphorylated, as well as protein kinases, phosphatases, and other proteins that are involved. Following up on this, his group is elucidating NFAT5 osmotic regulation at a systems level, exploring how all the phosphorylating enzymes and regulatory factors interact. Recently, Dr. Burg’s group has found an additional mechanism that contributes to high salt- and urea-induced increase of GPC, namely inhibition of the phosphodiesterase GDPD5; they are currently employing proteomic tools to identify the post-translational modifications involved and the enzymes responsible.

The lab has also been investigating the damage that occurs to renal cells when NaCl and urea are elevated. If NaCl or urea becomes too high, cells die by apoptosis; at lower levels, however, these agents still increase reactive oxygen species (ROS), damage DNA, and impede DNA repair. Interestingly, elevated ROS and activity of the DNA damage response protein, ATM, contribute to NaCl-induced activation of NFAT5. High NaCl-induced DNA damage is a general phenomenon that not only occurs in renal medullas, but in marine invertebrates and in C. elegans. It has been unclear how cells maintain transcription and replication in the presence of increased DNA breaks. Dr. Burg’s group has been studying this phenomenon, to uncover the mechanisms by which renal cells escape the known dangerous consequences of persistent DNA damage. In this respect, they found by DNA deep sequencing that high NaCl-induced DNA double strand breaks occur predominantly in regions of the genome devoid of genes (“gene deserts”).

These findings are not only significant for understanding kidney function, but the principles that emerge from Dr. Burg’s group also address the basic problem of how cells of all organisms survive osmotic stress caused by dehydration and by high concentrations of salt and urea.

Maurice Burg received his A.B. from Harvard College in 1952 and M.D. from Harvard Medical School in 1955. He came to the NHLBI as a postdoctoral fellow in the Laboratory of Kidney and Electrolyte Metabolism (LKEM) in 1957, following his intern and residency appointments in Boston. He then became an Investigator in the LKEM in 1960 and chief of the LKEM in 1975. In 2002, he became a Senior Investigator and chief of the Renal Cellular and Molecular Biology Laboratory. He has won numerous awards for his work in physiology, most notably, election to the National Academy of Sciences in 1991; in 2001 he also became a Fellow of the American Academy of Arts and Sciences. Dr. Burg has authored or co-authored more than 240 scientific articles and is a member of the American Physiological Society, American Society for Cell Biology, and American Society of Nephrology, of which he was past president.