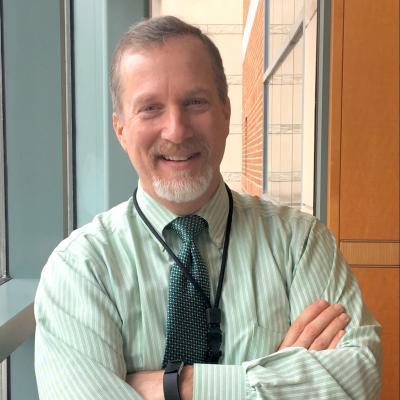 Dr. Olivier's research focuses on bronchiectasis, a condition that damages the body's ability to clear mucus from the airways and increases risk of severe lung infections by nontuberculous mycobacteria (NTM), which commonly are found in wet environments such as streams, rivers, and marshes. People with inflammatory lung disease such as cystic fibrosis are particularly vulnerable to this condition.

Bronchiectasis and chronic lung infections caused by NTM in the United States are steadily on the rise but difficult to diagnose and treat. NTM lung infection treatment currently requires multiple drugs taken for months or even years. Many patients develop significant intolerance to the drugs, do not respond to standard treatment, or develop recurrent infections after discontinuing therapy.

Dr. Olivier hopes to contribute to reducing the impact of such infections by studying common genetic characteristics of the people who suffer from them, defining how the infections lead to disease, and ultimately developing more effective, efficient treatments.

In collaboration with the NIAID epidemiology unit, Dr. Olivier and colleagues used healthcare claims databases coupled with observational data gathered from patients at the NIH Clinical Center to characterize the increasing prevalence and female predominance of bronchiectasis and NTM, as well as associated healthcare costs and comorbid conditions. They also identified environmental and atmospheric factors associated with NTM disease in high-risk populations such as people with cystic fibrosis and people age 65 years and older.

Dr. Olivier's studies of respiratory ciliary function, conducted through the NIH Rare Diseases Clinical Research Network, led to the discovery of potential defects in nitric oxide synthesis as well as Toll-like receptor signaling associated with altered ciliary beat frequency in patients with idiopathic bronchiectasis and chronic NTM infection. The studies found that these defects can be bypassed in the lab using methods that may have therapeutic potential, such as application of nitric oxide analogs or by signaling downstream with PDE5 inhibitors such as sildenafil.

Kenneth Olivier received his B.S. in microbiology from Louisiana State University in 1983 and his M.D. from Tulane University School of Medicine in 1987. He completed his internship and residency in internal medicine at the United States Air Force Keesler Medical Center in Biloxi, MS, and a fellowship in pulmonary and critical care medicine at the University of North Carolina at Chapel Hill. In 1992, he was awarded a clinical research fellowship at the UNC General Clinical Research Center. He completed a Master of Public Health degree in infectious diseases epidemiology from the UNC School of Public Health in 1994.

He served as a pulmonary critical care specialist at the USAF Wilford Hall Medical Center in San Antonio and directed the pulmonary critical care fellowship training program for the San Antonio Uniformed Services Health Education Consortium. He is a veteran of both the Afghanistan and Iraq wars and was awarded the Meritorious Service Medal, Air Medal, Aerial Achievement Medal, and a Bronze Star prior to his retirement as a colonel from the Air Force Reserves in 2010.

Dr. Olivier joined the Laboratory of Clinical Infectious Diseases at the National Institute of Allergy and Infectious Diseases (NIAID) as a staff clinician in 2005. While at this lab, he received three NIAID Merit Awards, one in 2012 and two others in 2014. He joined the NHLBI Cardiovascular and Pulmonary Branch in 2014. He has authored or coauthored more than 90 peer-reviewed research publications, invited review articles, and book chapters, served on the editorial board of the Journal of Immunology, and is a member of the American Thoracic Society and a fellow of the American College of Chest Physicians.

This page was last updated on September 4th, 2021