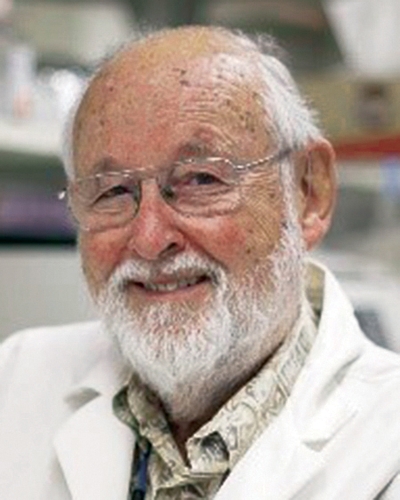 The Role of Cytokines in Host Defense and Repair

Based on our findings that the antimicrobial defensins are chemotactic for host cells that express chemokine receptors (CCR6 or CCR2) our laboratory has changed its emphasis considerably from studies of chemokines to studies of these chemokine mimics and other endogenous molecules that are rapidly released by cellular degranulation or cell necrosis in response to infectious or injurious danger signals. These molecules rapidly initiate host defense based on their interaction with chemotactic as well as activating receptors on host cells. We have termed them "alarmins" based on their capacity to rapidly mobilize and activate innate as well as subsequent adaptive host immune defense mechanisms. This alarmin concept was conceived based on our earlier studies of antimicrobial proteins such as defensins and cathelicidin (LL37) that we identified as having the capacity to use both chemoattractant receptors as well as activating receptors on host antigen-presenting cells. This idea led us to identify other antimicrobial proteins as having similar properties, including eosinophil-derived neurotoxin (EDN), lactoferrin, granulysin, high mobility group (HMG) box 1 protein (HMGB1), and more recently, HMG nucleosome-binding protein 1 (HMGN1). All of the alarmins identified so far have the capacity to activate Toll-like receptors (TLR) on dendritic cells and promote adaptive immunity. Since radiotherapy, chemotherapy and growing tumors themselves certainly cause extensive tissue injuries and increased susceptibility to infections, they undoubtedly induce the release of alarmins. Consequently, alarmins participate in the host response to cancer, and they can also potentially be used as immunoadjuvants in tumor vaccines. The alarmin concept has enabled us to identify a previously unidentified subset of Danger Associated Molecular Patterns (DAMPs) with the capacity to rapidly mobilize and activate host defense with potential anti-tumor activities.

In our second project entitled, "Role of Suppressive Immune Cells in Cancer", we are investigating a) suppressive regulatory T cells (Tregs), b) myeloid-derived suppressor cells (MDSC) and c) suppressive DCs. We have found that the prototypic proinflammatory cytokine, TNF also induces the proliferative expansion and activation of Tregs. TNF activates Tregs subsequent to T effector cells (Teff) by interacting with the TNFR2 receptor. This pathway serves as a feedback down regulator of inflammation. At least half of tumor infiltrating T cells (TILs) are actually Tregs, most of which express TNFR2. We have found them to be "super" suppressive promoters of tumor immune evasion. Thus, means of countering these Tregs need to be identified to optimize antitumor responses.

Our third project, involves the evaluation of a number of Chinese Traditional Medicines (TCM), that are in clinical use in China for the treatment of cancer patients. We recently found that a purified plant extract called Cryptotanshinone (CT) in addition to being cytotoxic for a variety of tumor cels was also a potent activator of Dendritic Cells (DC). This enables CT to induce innate as well as adaptive immune responses. We therefore injected it into tumors located subcutaneously in the flanks of mice and when administered together with a checkpoint inhibitor (anti-PDL-1), CT markedly inhibited tumor growth. Those mice surviving longterm developed specific immune memory and  the capacity to resist challenges of injections of the same, but not an unrelated tumor. The mechanisms of action and other methods of delivering  CT are under investigation.

Based on the alarmin concept, we made another serendipitous finding. One of our extramural colleagues observed a close association between alpha- synuclein (AS) and inflammatory cells in gastrointestinal biopsy specimens from pediatric patients with various kinds of inflammatory bowel syndromes (IBD). He asked us to determine whether AS attracted inflammatory cells. Indeed we found that AS was a potent in vitro chemoattractant of monocytes and neutrophils. We then determined that AS also was a potent activator of DC, and therefore had the activity of a proinflammatory alarmin. Since mutated forms of AS have been reported to be associated with early onset of severe familial Parkinson`s Disease, AS is proposed to be causally involved in that as well as other neurodegenerative diseases. Our reported findings have been considered as a noteworthy advance in showing how inflammation may be contributing to these diseases and we are investigating the mechanism of action of AS.

Dr. Oppenheim obtained his M.D. degree from the Columbia College of Physicians and Surgeons, New York, trained as a clinical associate at the National Cancer Institute (NCI), Bethesda, Maryland, and was a postdoctoral fellow at the University of Birmingham, England, in immunology. He returned to the National Institute of Dental Research and subsequently headed the Section of Cellular Immunology there and, since 1983, has been head of the Laboratory of Molecular Immunoregulation, NCI-Frederick.