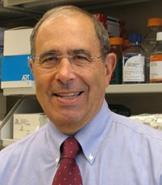 The mission of the Clinical Pathophysiology Section is to study the genetic causes and the biological consequences of inborn diseases of phagocytic blood cells.

Figure 1. The neutrophil and monocyte are the most abundant white blood cells in the circulation. Upon stimulation, they adhere to the endothelium and migrate into the tissues, where they seek and destroy pathogens. Disorder of cell signaling, granules, and oxygen metabolism have been described. The image depicts the various diseases of monocytes and neutrophils studied by the Clinical Pathophysiology Section, including leukocyte adhesion deficiency, IRAK4-deficiency, NEMO-deficiency, Job’s syndrome, secondary granule deficiency, Chediak-Higashi syndrome, myeloperoxidase deficiency, and all genotypes of chronic granulomatous disease (CGD).

Chronic granulomatous disease (CGD) has been our major focus. CGD occurs in patients whose phagocytes (neutrophils and monocytes) are unable to generate antimicrobial levels of reactive oxygen species (e.g., superoxide anion) due to mutations in components of the NADPH oxidase as shown below.

Figure 2. This image shows the amino acid mutations in components of the NADPH oxidase that have been associated with chronic granulomatous disease (See Kuhns et al., NEJM 2010).

Without sufficient production of superoxide anion, a key mediator of host defense, these patients suffer from life-threatening bacterial and fungal infections as well as tissue granuloma formation and other inflammatory diseases. Our section studies host and microbial determinants of pathogenesis by fungal (e.g., Aspergillus fumigatus) and bacterial (e.g., Granulibacter bethesdensis) causes of infection in CGD patients. Current work is focusing on the intracellular trafficking and persistence of this organism.

Genetic immunodeficiencies such as CGD also provide unique opportunities to study the roles of specific elements of the immune system in human health. For example, our clinical study employing non-invasive radiologic imaging of the cardiovascular system of CGD patients demonstrated a contribution of reactive oxygen species to the pathogenesis of atherosclerosis. Further studies are underway to evaluate the role of the NADPH oxidase in this important disease.

Dr. Gallin received his medical training at Cornell University Medical College in New York City followed by residency in internal medicine at Bellevue Hospital. In 1971, he first came to NIH as a clinical associate in Sheldon Wolff’s Laboratory of Clinical Investigation. In 1974 he served as senior chief resident in medicine at Bellevue Hospital before returning to NIH in 1976 as a senior investigator. Dr. Gallin has served as director of the NIAID intramural research program (1985–1994) and as chief of the Laboratory of Host Defenses (1991–2003). Dr. Gallin served as the director of the NIH Clinical Center from 1994 to 2017. Among his honors are membership in the National Academy of Medicine and a master of the American College of Physicians.