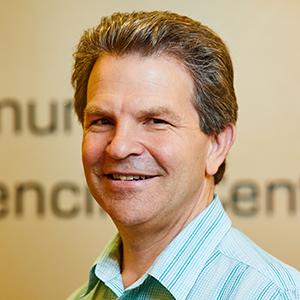 Applied math and physics, signal and image processing, computer science and statistics: these are a few areas of Dr. Mullikin's educational background that have enabled him to tackle a diverse range of projects, from measuring cardiac output from saline dilution curves (Voorhees et al., Med Instrum 1985) to measuring the surface area of objects detected in 3-D images (Mullikin and Verbeek, Bioimaging 1993), and from automated tracking of sample lanes on ABI377 gel images to assembly of whole mammalian genomes from Sanger sequence data. His primary interests are in developing novel and efficient algorithms using high-performance compute clusters to reduce large data sets into meaningful results.

Since becoming the acting director of NISC in December 2009, then director in September 2011, the interactions between his Comparative Genomics Analysis Unit and NISC complemented each other. As NISC's (acting) director, he effectively managed this large center during a particularly challenging time of rapid technology change, which has now seen next-generation sequencing throughput increase 20-fold. This growth has complemented Comparative Genomics Analysis Unit research directions, which continue to focus on the algorithmic reduction of large datasets into meaningful results.

In collaboration with Paul Liu, Ph.D., NHGRI, his group is looking at a whole-genome view of DNA sequence variations in human induced pluripotent stem cells generated with non-integrating plasmid vectors. Here they were able to detect somatic mutations locked into the stem cell lines at a rate of about one mutation per two-million bases, or around 1,300 mutations genome-wide.

With Yardena Samuels, Ph.D., formerly with NHGRI and currently at the Weizmann Institute of Science, Rehovot, Israel, and Daphne Bell, Ph.D., NHGRI, his group is developing statistically robust methods for detecting mutation patterns in tumors when compared to their matched normal samples. In collaboration with Patrick Duffy, M.D., at the National Insitute of Allergy and Infectious Diseases, his group assembled the genome of Plasmodium coatneyi from a single lane of HiSeq2000 data, which provided more than 500-fold coverage.

This assembly will enable future genomics research into this important non-human primate malaria species, which is an excellent model for the biology, immunology and pathology of humans infected with P. falciparum. In collaboration with Paul Wade at the National Institute of Environmental Health Science, his group is working on detecting whole-genome methylation patterns using Illumina sequencing of bisulfite treated DNA from mouse liver tissue.

This work will add this important new analytical capability for future research on methylation patterns in the study of organismal development, cellular development and cancer progression. RNA sequence analysis is another area of rapid analytical methods development, and they have been applying these methods to discover genes involved in coronary artery disease by examining the expression profiles and splice variant differences between RNA extracted from lymphoblastoid cell lines derived from ClinSeq subjects with high and low levels of coronary artery calcification.

The list of projects like these continues to grow as advances in genomic sequence technology coupled with an expanding array of analytical methods bring researchers to NISC and to his research group to find new ways to unlock the genomic mysteries currently hidden in their valuable samples. Dr. Mullikin looks forward to continuing these collaborative efforts and entering into many exciting new efforts as the genomics field rapidly evolves.

Dr. Mullikin's educational background is in electrical engineering, having earned a B.S. and an M.S. from Purdue University, and in physics, with an emphasis in image processing and pattern recognition, having earned a Ph.D. from Delft University of Technology, Netherlands. Dr. Mullikin first began to apply these skills to the genomics field in 1997, just as the Human Genome Project was scaling up. He has been involved in many aspects of the Human Genome Project as well as numerous other genome projects. His Sequence Search and Alignment by Hashing Algorithm (SSAHA) greatly sped up the process of SNP discovery, first for The SNP Consortium Project and later in the International HapMap Project. Dr. Mullikin also developed a whole-genome assembly program, called Phusion. Dr. Mullikin develops and utilizes computer programs to analyze large data sets generated by systematic DNA sequencing projects. A highly skilled computational geneticist, he collaborates extensively with biomedical researchers, developing data analysis methods specifically tailored for each class of project.