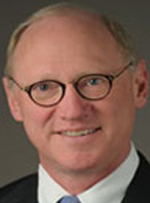 Epithelial cells make up critical barriers that separate outside and inside, whether within the skin or in internal organs and tissues. The Anderson lab has long been interested in the primary mechanism that binds these cells together to create these barriers: the tight junction. His group studies how these transmembrane complexes regulate the movement of material between neighboring epithelial and endothelial cells, ranging from small electrolytes to larger travelers like immune cells looking for pathogens.

Using kidney epithelia as a model system, Dr. Anderson’s lab has been among the leaders in identifying the many individual proteins that make up the tight junction structure. His team was the first to propose and demonstrate that the transmembrane claudin proteins create charge-selective pores in the tight junction and that different members of the claudin family confer different ion selectivity. Together, Dr. Anderson’s claudin research has provided significant insight toward our current knowledge regarding the molecular basis of selective paracellular transport and inherited human defects of the junction barrier. His group has also demonstrated that the protein Zonula Occludens-1 stabilizes the tight junction barrier by linking the tight junction to the actin cytoskeleton.

While continuing to characterize some of the key players in the tight junction, Dr. Anderson’s group is progressing towards higher order studies of the tight junction complex. Hundreds of tight junction-associated proteins have been identified to date, and the next step is to understand the organizational structure. Through crosslinking studies and imaging approaches, his group is examining protein interactions to identify multi-protein assemblies within the tight junction. Additional studies using biotinylation and mass spectrometry are helping divide these several hundred tight junction proteins into discrete functional groups, such as being directly involved in maintaining the barrier, establishing cell polarity, or regulating endocytic trafficking, to name just a few.

Ultimately, this additional insight into tight junction organization and regulation may lead to approaches enabling manipulation of the barrier permeability, which opens up numerous applications. For example, tight junctions are frequently disrupted and “leaky” during inflammation, resulting in improper movement of fluid and cells and characteristic symptoms such as tissue swelling; therapeutic manipulation with drugs might quickly restore barrier integrity. Conversely, subtle loosening of the tight junction in some locales, notably the blood-brain barrier, may allow for improved delivery of antibiotics or other drugs to the brain.

James Anderson received his B.S. in biology from Yale College in 1974, his Ph.D. in biology from Harvard University in 1979, and his M.D. from Harvard Medical School in 1983. He returned to Yale to carry out his internship and residency in internal medicine in 1983, and a fellowship in hepatology in 1986. Dr. Anderson joined the faculty at the Yale School of Medicine in 1988, advancing to professor of medicine and cell biology in 1998. In 2002, he became professor and Chair of the Department of Cell and Molecular Physiology at the University of North Carolina at Chapel Hill School of Medicine. Dr. Anderson came to the NHLBI in 2010. He has received several awards including the 2007 Takeda Distinguished Research Award from the American Physiological Society. He has authored or co-authored more than 120 scientific articles, reviews, and book chapters. Dr. Anderson is also an elected Fellow of the American Gastroenterological Association, and an elected member of the American Society for Clinical Investigation and the Association of American Physicians.