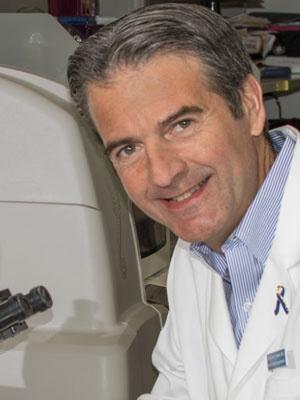 Section on Endocrinology and Genetics

There are four areas of science that my laboratory and clinical research work have contributed significantly to: From being involved in the identification of the first mutations in the human glucocorticoid receptor gene as a postdoctoral fellow in George Chrousos’ lab in 1989, to the most recent identification of genes in Cushing syndrome (2013-2019), I have been involved in or made some of the most important discoveries in the clinical and molecular genetics of adrenal diseases over the last three decades. My laboratory found the genetic defects leading to Carney complex and primary pigmented nodular adrenocortical disease (PPNAD) or variants thereof (PRKAR1A, PRKACA, PRKACB), described a new form of adrenocortical hyperplasia which we named “isolated micronodular adrenocortical disease” (iMAD) and other related pathologies (primary bimorphic adrenocortical disease or PBAD and others), studied Algroove syndrome and other genetic forms of adrenocortical insufficiency including the most recent one due to SGPL1 deficiency, and was one of the collaborating labs in identifying ARMC5, the gene for primary macronodular adrenocortical hyperplasia (PMAH). We were the first to show FH and other mutations in PMAH and reported widely used clinical tests today for the diagnosis of PPNAD, iMAD, and PMAH. We have also studied extensively the genetics of primary hyperaldosteronism and endocrine hypertension. Finally, in collaboration with other groups we have investigated diseases of the adrenal medulla, including pheochromocytomas and related lesions, especially those linked to succinate dehydrogenase (SDH) defects.

Our work on the pituitary gland started as complementary to the one on the adrenal gland: as we were studying familial cases of syndromes predisposing to adrenocortical tumors, we came across patients and families with predisposition to pituitary tumors. First, we studied patients with multiple endocrine neoplasia type 1 (MEN 1) and Carney complex (CNC) where we found the molecular defects leading to their growth-hormone (GH)-secreting tumors. This led to us collecting over the years an international cohort of patients with GH-secreting tumors that did not have MEN 1 or CNC. We were the first to describe succinate dehydrogenase (SDH) defects leading to pituitary tumors. Recently, our laboratory identified a new condition that we named X-LAG for “X-linked acrogigantism” in patients with GH-producing hyperplasia or tumors. We then identified the genetic defect in X-LAG which also appears to explain more than 80% of sporadic cases of early gigantism. The defect involves the overexpression of an orphan G-protein coupled receptor (GPCR) on the X-chromosome, GPR101; currently my lab is dedicating substantial amount of resources in the molecular elucidation of GPR101’s function. In addition, we studied patients with pediatric Cushing disease (CD) due to corticotropin (ACTH)-secreting pituitary tumors, as part of our studies on Cushing syndrome. It is no exaggeration to say that almost everything that is known today in the literature about pediatric CD, from its molecular investigations to its diagnosis and treatment is derived from work that has been done at the NIH. My laboratory is currently intensely involved in the identification of genetic defects predisposing to pediatric CD.

We have also worked on the molecular elucidation of PKA-related defects and their contribution to human disease. It all started with our identification of the genetic defect leading to Carney complex: PRKAR1A mutations were the first PKA genetic defects to be found associated with any human disorder. PRKAR1A is the main regulatory subunit of PKA, essentially the cAMP “receptor” in cells. We stayed in the field, as it turns out that almost any disorder we studied was linked one way or another to cAMP signaling (including the latest one, GPR101 defects). Currently, we maintain a database of PRKAR1A mutations that is freely available to the public: http://prkar1a.nichd.nih.gov/hmdb/intro.html. Floxed Prkar1a+/- animal models made in my laboratory addressed the participation ofPRKAR1A in endocrine cell growth and neoplastic development of other tissues, such as the bone. In follow up work, my laboratory identified cAMP-binding phosphodiesterase (PDE) genes PDE11A and PDE8B as potentially being involved in cAMP-related tumors and we studied the respective animal models, work that is ongoing. Our animals are freely shared with investigators in the field and are currently in use by many. Our ongoing work aims at identifying the contributions of the other PKA subunits in human disease, from PRKACA and PRKACB as oncogenes to the protective effects of PRKAR2A in diet-induced obesity.

Finally, we studied SDH defects almost by accident but some of my most widely cited work is from this field of research. A decade ago, I came across sporadic cases of a very rare condition called Carney Triad that was very attractive to me because of its unique combination of adrenocortical (adenomas and hyperplasia) and adrenomedullary (pheochromocytoma) tumors. The same patients developed gastrointestinal stromal tumors (GIST) and paragangliomas. We were the first to describe that a subset of these patients, in whom the disease is inherited in an autosomal dominant manner, represented a new condition which today bears the name of the investigators involved (Carney-Stratakis syndrome, CSS). We found that CSS is caused by SDH defects. We then identified SDH defects in sporadic cases of the so-called “wild-type” GISTs, in pituitary tumors (see above), and a peculiar, yet pathognomonic epigenetic signature in Carney Triad: SDHC promoter methylation (SPM). Today, SDH defects explain almost a fifth of all “wild-type” GISTs providing clues for a new molecular pathway for their treatment and the tests we developed (SDHB immunoreactivity and SPM) are widely used diagnostically for the identification of tumors caused by SDH defects and Carney Triad, respectively. Ongoing work in this field is now done collaboratively with laboratories around the world and the National Cancer Institute.

During my graduate work I developed an interest in the genetics of endocrine diseases, especially those that present with a predisposition to endocrine tumors and other neoplasms. My career started in 1985 as a graduate student in the Endocrine Unit of the Medical School of The University of Athens under the mentorship of Prof. M. Batrinos, and as a biochemist (tech) in a Radioimmunoassay Lab at the Hospital Mitera, Athens, Greece. In Paris, France, I spent time with Jean Pierre Luton and Xavier Bertagna in 1988; I was exposed there to research on mainly adrenal and pituitary diseases. In 1989-1990, at the NIH lab of George Chrousos, I was part of the team that identified the first genetic defects in the human glucocorticoid receptor (J Clin Invest 1991;87:680). Following this post-doctoral fellowship in molecular endocrinology at the NIH, I continued with my clinical training at Georgetown University Medical Center, Washington, DC, where I finished a residency and two fellowships in Pediatrics, Pediatric Endocrinology and Medical Genetics & Dysmorphology. I was recruited back to NIH, trained in linkage analysis and cancer genetics, and started a laboratory (in 1995) studying the genetics of endocrine tumors in the context of a variety of genetic syndromes. In 2000, I identified the PRKAR1A gene causing Carney complex (CNC) (Nat Genet 2000;26:89); this gene is expressed in almost all human tissues and regulates protein kinase A (PKA) and, consequently, cAMP signaling. Prkar1a+/- animal models made in my laboratory addressed the participation of PRKAR1A in endocrine cell growth and neoplastic development of other tissues, such as the bone (PNAS 2010;107:8683). My laboratory identified phosphodiesterase (PDE) genes as potentially being involved in cAMP-related tumor growth (Nat Genet 2006;38:794; N Engl J Med 2008;358:750). We also identified defects affecting mitochondrial oxidation in endocrine tumors (N Engl J Med. 2007;357:1054) and in pediatric gastrointestinal tumors (GISTs) (PNAS 2011;108:314). In collaboration with the hospital I was trained in France, the ARMC5 gene was identified in macronodular adrenal hyperplasia (N Engl J Med. 2013;369:2105), a gene that we are now modeling in mice, fly and fish. Our laboratory identified the PRKACA and PRKACB genes in micronodular adrenal hyperplasia and Carney complex (N Engl J Med. 2014;370:1019 & 2014;370:1065, respectively). Most recently, our laboratory identified a new condition that we named X-LAG for “X-linked acrogigantism”; we then described the genetic defect  that explains more than 80% of the cases of early gigantism and growth-hormone dependent overgrowth that appears to be due to abnormalities of an orphan G-protein coupled receptor (GPCR), GPR101 (N Engl J Med, 2014;371:2363). Ongoing genome-wide work aims at identifying genetic defects for Carney Triad, wild-type GISTs, endocrine hypertension (in association with adrenocortical tumors), pediatric gigantism, and other forms of adrenal and pituitary tumors. Molecular studies focus on PKA, PDEs, ARMC5, and GPR101. Over the years, my laboratory has trained more than 150 students, residents and fellows from all over the world but mostly Brazil, Greece, France, Italy and of course the United States. To date, most keep in touch and a great number are involved in health science research. At my lab we are very proud of this extended family that, thankfully, keeps growing. Finally, although my administrative duties have undoubtedly increased over the years, I am still seeing patients and families and teach medical trainees almost daily; I, thus, remain deeply committed to serving the “physician” part of being a physician scientist.

This page was last updated on November 6th, 2020