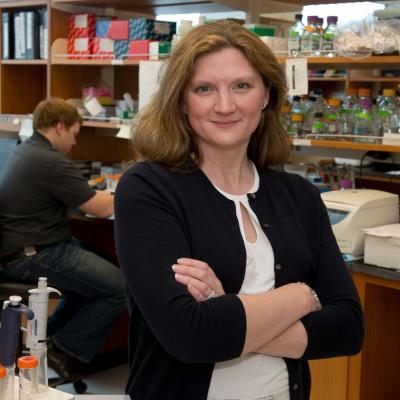 Laboratory of Vascular and Matrix Genetics

As a matrix biologist, vascular biologist, and geneticist, Dr. Kozel seeks to better understand the factors that influence vascular disease severity in patients with rare disorders. The majority of Dr. Kozel's work focuses on the study of two elastin insufficiency-related diseases: the neurodevelopmental condition known as Williams syndrome (WS) and isolated supravalvular aortic stenosis (SVAS), a narrowing of the aorta, the vessel that carries blood from the heart to the rest of the body.

As its name implies, elastin is an elastic protein — it helps blood vessels as well as other tissues in the body stretch and recoil. Individuals with WS are missing one copy of 25-27 coding genes, including the elastin gene — usually there are two copies of each of these genes. Those with elastin-associated SVAS have genetic changes affecting only elastin. With only one good copy of the elastin gene, persons with WS and SVAS make inadequate quantities of elastin, which predisposes them to stiff blood vessels that are prone to stenosis (or vessel narrowing), restricting blood flow. While some patients with WS (up to 35 percent) have no appreciable vascular abnormalities, approximately 20 percent of affected people have severe artery disease requiring surgical intervention to correct areas of stenosis. Patients in the middle of these two extremes of WS have moderate vascular problems.

The variability of the clinical signs of WS suggests that other genes work with the elastin gene in determining disease severity. To investigate this, Dr. Kozel initially began her work by studying mice with less elastin and looking to find additional gene changes throughout the genome (modifiers) that were associated with blood pressure and blood vessel size differences. Those studies led to the finding that changes in the levels of oxidative stress genes could influence the risk of hypertension in this group —and that medications aimed at reducing reactive oxygen species (antioxidants) could positively impact blood pressure and vessel stiffness.

More recently, Dr. Kozel's team has started to look at changes in DNA patterns in people with WS. Together with collaborators worldwide who enabled a growing collection of more than 500 DNA samples from people with WS, the Laboratory of Matrix and Vascular Genetics has found that certain variations in extracellular matrix and immune genes influence the risk of severe narrowing of the blood vessels in people with WS. Initial studies were done by surveying the protein coding part of the genome, but more recent efforts have turned to non-coding and epigenetic variation. Non-coding and epigenetic variation are important for influencing when and where a gene is turned on—and are understudied sources of disease variability. Engaging families with atypical changes to the DNA in the WS region (including those with SVAS for whom no gene change has been found) has allowed the team to understand the role of the various genes in the WS region better. Induced pluripotent stem cells made from participants' blood cells have enabled us to study a patient's blood vessel cells without needing to access the blood vessel itself.

In addition to her genetic studies, Dr. Kozel's group also brings in patients with WS for deep phenotyping studies at the NIH Clinical Center. There, her team's primary emphasis in the Heart, Lung, and Blood institute is on cardiovascular health and her recent work has shown differences in blood vessel stiffness and heart rate variability in WS. Together with known problems with stenosis and tortuosity, these features may contribute to the increased risk of sudden death seen in WS and elastin-associated SVAS. In addition to the cardiovascular studies, her group has collaborated with expert clinicians and scientists in several NIH institutes to investigate lung, eye, developmental, and gastrointestinal symptoms in this population. By combining those findings using machine learning, they are starting to identify important patterns in health outcomes. Knowledge of those patterns can help deliver better care to patients because health concerns may be identified before they become problems.

More recently, Dr. Kozel's team and their collaborators at Geisinger Health System were awarded a U01 grant to take a completely different approach to genetics. Instead of starting with a group of people with shared symptoms and giving them a diagnosis, they are using an innovative gene first approach to identify a group of people with gene changes in connective tissue genes and then looking to find what they have in common. Initial investigation is done by medical record review at Geisinger and then participants are invited to come to the NIH for full assessment. Those studies are ongoing but have already uncovered new and important health findings for people with changes in the ELN and LOX genes.

Dr. Beth A. Kozel graduated summa cum laude from Washington University in St. Louis with a bachelor’s degree in biochemistry in 1996. She attained a medical doctorate and doctorate in cell biology and physiology at the Washington University School of Medicine (WUSM) in 2004 through a combined M.D.-Ph.D. program. Dr. Kozel completed her residency in pediatrics at St. Louis Children’s Hospital and her residency in clinical genetics at WUSM. She began her academic career at WUSM before moving to the NIH in 2015 as a Lasker Clinical Research Scholar. Over the years, she has received numerous awards for research, clinical care, and mentoring, including the NHLBI Director’s Award for Innovation in 2021 and the Williams Syndrome Association’s Hope award in 2019. Dr. Kozel has authored or contributed to more than 70 publications and is a member of several professional societies including the American Society of Matrix Biology and the North American Vascular Biology Organization and is a Fellow of the American College of Medical Genetics and Genomics.