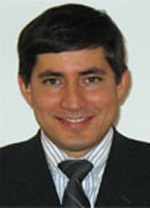 Heart attacks are caused by the interruption of blood supply to a part of the heart, depriving cells of oxygen. Dr. Arai focuses his research on understanding and intervening in this process of myocardial infarction and ischemia. He is actively involved in developing new imaging methods, in particular magnetic resonance imaging (MRI) technologies that can be used in the clinic. The new technologies are validated in pre-clinical and clinical studies, which generate another cycle of new imaging methods—a process that leads to improved understanding of myocardial ischemia and infarction and practical new imaging methods suitable for diagnostic imaging.

Dr. Arai’s laboratory has successfully moved new technologies into the clinical setting. For example, he developed new MRI methodologies that are more reliable than product-level pulse sequences, validated these methodologies in animal models, and translated them into patients. He has also worked on quantifying the extracellular volume fraction of myocardium, a measurement with potential to detect diffuse myocardial fibrosis; cardiac fibrosis is an early sign in many cardiomyopathies, and a method of detection could have great prognostic value. His laboratory has also been a leader in using cardiac MRI to understand the role of edema within the area at risk (AAR) of an acute myocardial infarction; comparing the AAR to actual infarct size offers an additional level of clinical information, as it shows the effectiveness of intervention strategies.

Quantitative analysis of myocardial perfusion has recently documented that first-pass stress perfusion cardiac MRI scans can be quantified at a pixel level, which is equivalent to approximately 32 microliter volumes of myocardium. This resolution is more than an order of magnitude higher than currently possible by the physiological reference standard, microsphere methodology, and higher resolution than clinically available methods, which someday may enable much more nuanced patient diagnosis of coronary artery disease. These studies have benefited from new image acquisition methods and analysis techniques developed within Dr. Arai’s laboratory.

Andrew Arai earned a B.A. in biophysics from Cornell University in 1982 and a M.D. from the University of Illinois in 1986. He did his internship, residency, and fellowship at the Oregon Health Sciences Center between 1986 and 1993. He has been at the NIH since 1993 and became a tenured Investigator in 2004. At the NHLBI, he directs an advanced cardiac imaging research program that includes fellowship training. In 2001, Dr. Arai received a Presidential Early Career Award for Scientists and Engineers (PECASE), the highest honor bestowed by the U.S. Government on outstanding scientists and engineers beginning their independent careers. Dr. Arai has authored or coauthored over 150 papers or book chapters. He is president of the Society of Cardiovascular Magnetic Resonance and a member of the American Society of Clinical Investigation. As a member of the American Heart Association Council on Clinical Cardiology and Committee on Cardiac Imaging, he has helped develop various scientific advisory papers on cardiac imaging. He has also served as an expert advisor to the U.S. Food and Drug Administration (FDA).